Keep those off-season fishing mechanics sharp by getting out on your local stream or river this winter.

Ask just about anyone if standing in two feet of 33 degree water while snow somehow finds its way down the back of their base layer sounds like their idea of a good time, and you’ll probably get a resounding no. This time of year, it’s tempting for anglers to stash the rods and hang up the waders ‘til next spring. And that turnkey fireplace beside the 55-inch flat screen doesn’t make the decision any easier.

But for those willing to don their thickest neoprene waders, set up shop on an icy riverbank for a few hours and fuss with frozen guides, there are still several opportunities to sharpen one’s angling skills, take in Idaho’s beautiful winterscape, and hook a few fish. 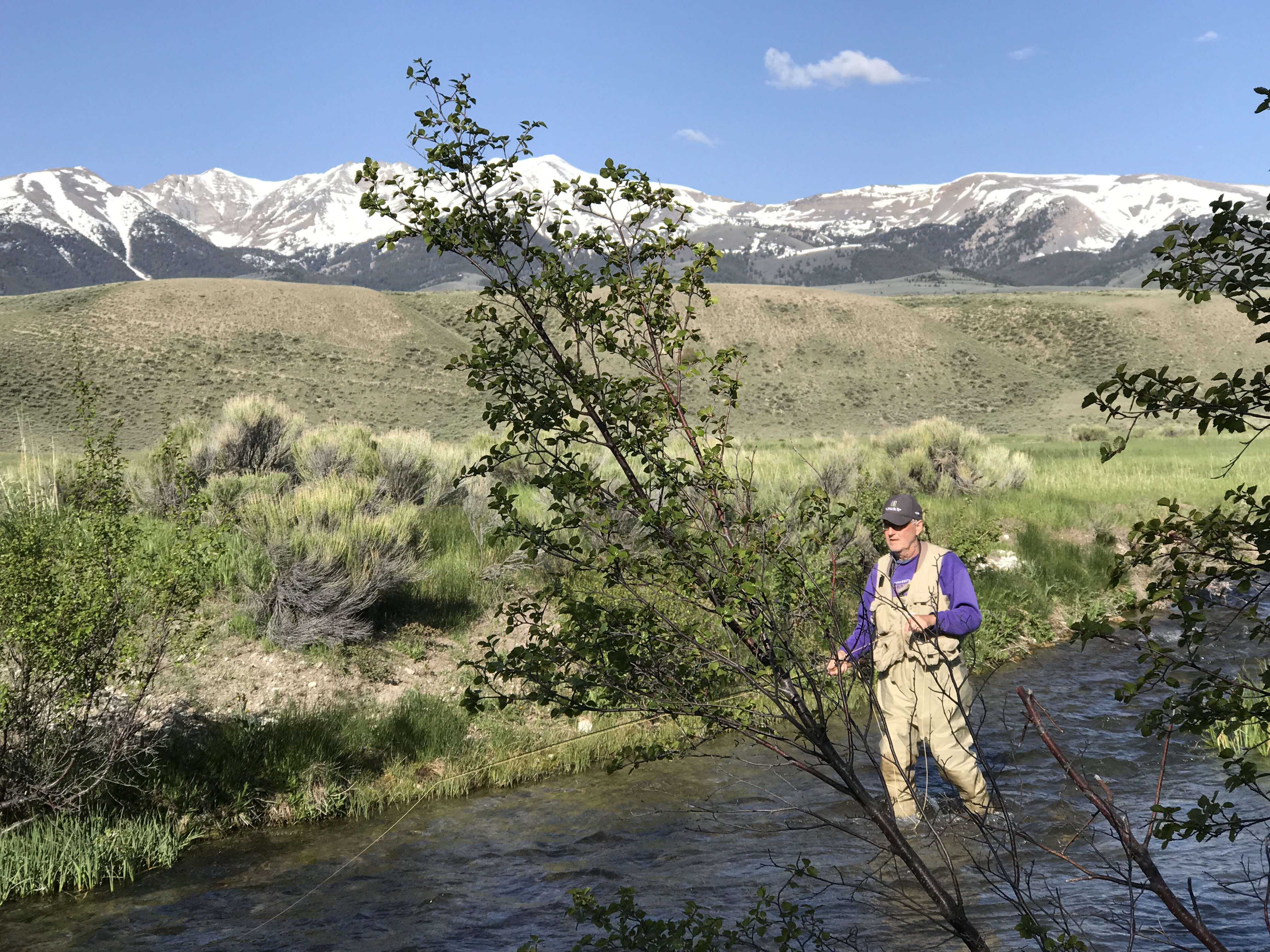 The benefits and strategy of winter stream fishing

There are several benefits to fishing rivers and streams during the coldest part of the year. For starters, you may have the whole stretch of river bank to yourself. For a handful of folks, fishing plays second fiddle to other winter hobbies like fly tying, skiing or making a pot of chili in the slow cooker. It shouldn’t be too difficult to find a nice stretch of river where you won’t have to worry about summer crowds.

Seek out slow, deep water where trout and whitefish will most likely be holding, expending as little energy as possible. Look for slow pockets or pools on the edges of faster moving water, where food will be floating past in the main currents.

Just because fish are moving slower in the winter doesn’t mean they’re not still looking for an easy meal. Insect hatches are sparse in winter, but that doesn’t mean they still aren’t around as a food source for slow-moving fish. Fish can be frustratingly picky this time of year, so presentation and food size is vital.

As a general rule of thumb, use smaller bait and flies than you would in spring and summer.

The same goes for tippet. River flows in winter slow down dramatically and tend to be lower and clearer. That means it’s even easier for fish to see right through a poorly-executed presentation. It might be wise to downsize your tippet from what you usually run in the spring and summer, such as a 4X to a 5X. 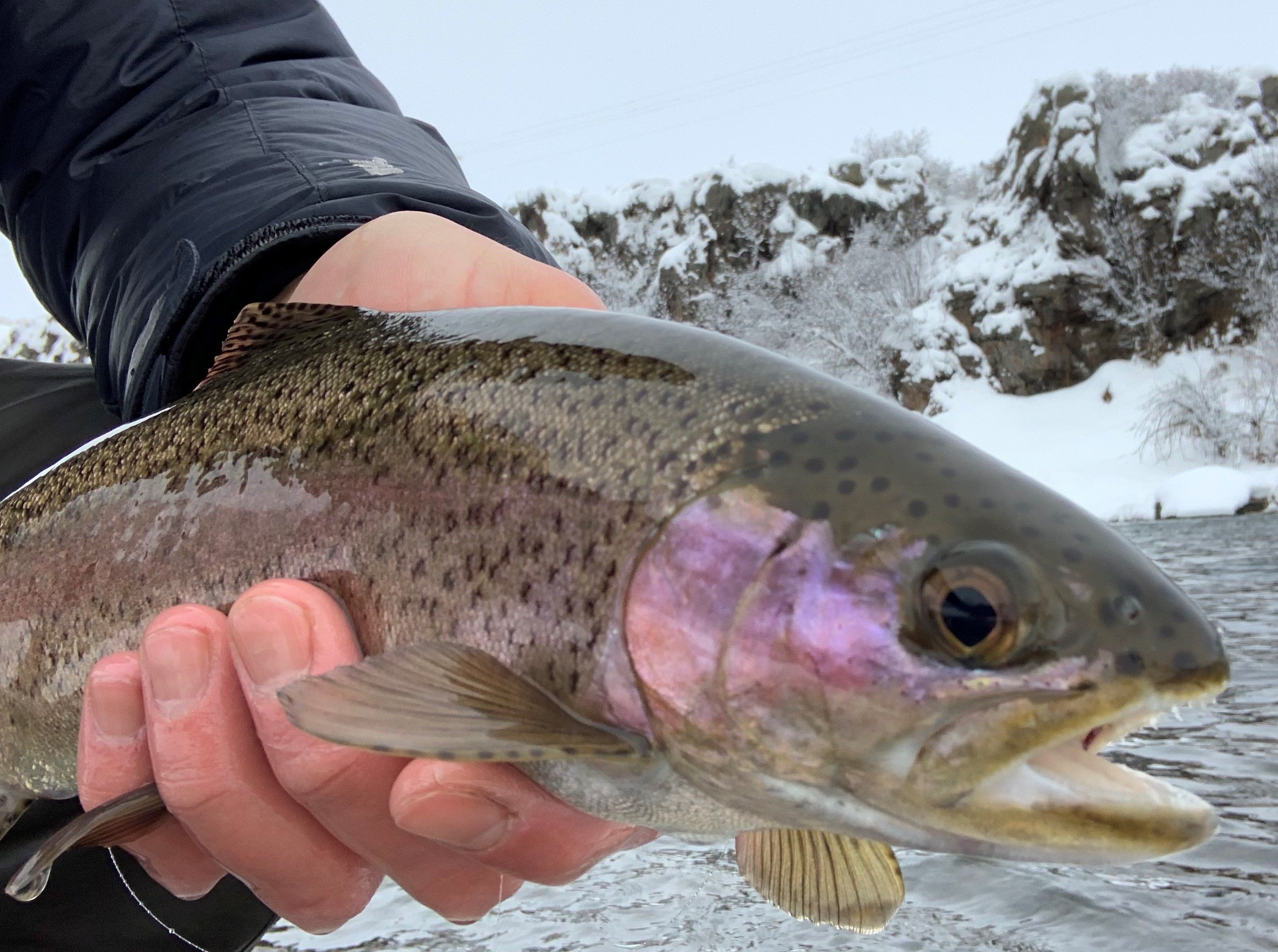 Once you got your rig set up, it’s good to try different techniques that you might not have tried before in the warmer months.

Dead drifting is critical in winter because trout won’t chase a fly in cold water. To dead drift, simply let the slow-moving current carry the fly either on the surface (dry fly) or just beneath the surface in the upper column of water (bait, nymphs, midges). If you see dimples on the water, it may be fish feeding on drifting insects, which will likely be tiny midges or mayflies.

Occasionally stream fish will rise for dry flies, such as small midges or olive mayflies, during the winter. Save yourself a few extra grams of weight and keep that box of dry flies at home. A small midge emerger or a tiny olive mayfly emerger will be the only dries you’ll need.

If fishing for trout or steelhead, try swinging a fly by keeping the fly in the upper part of the water column. Steelhead and trout will often feed upwards, so a well-placed fly swinging across the upper portion of the water just may catch their eye.

If the fish aren’t going for small flies like midges and stoneflies, it may not hurt to lob a streamer out there to test the waters, so to speak. Streamers can look like a big, easy meal when presented slowly, but don't expect trout to vigorously chase them like they do in summer.

With most winter fisheries, fish won’t be getting after it until mid- to late-morning. Unlike peak summer conditions, fish will be most active during mid-afternoon on sunny days, and even longer into the afternoon on cloudy days.

It’s easy to see how excited one might be about submerging their southern hemisphere in icy water all for the hopes of catching a fish, but rest easy (and long) knowing that those fish will still be waiting for you when you hit your local river or stream later in the morning. 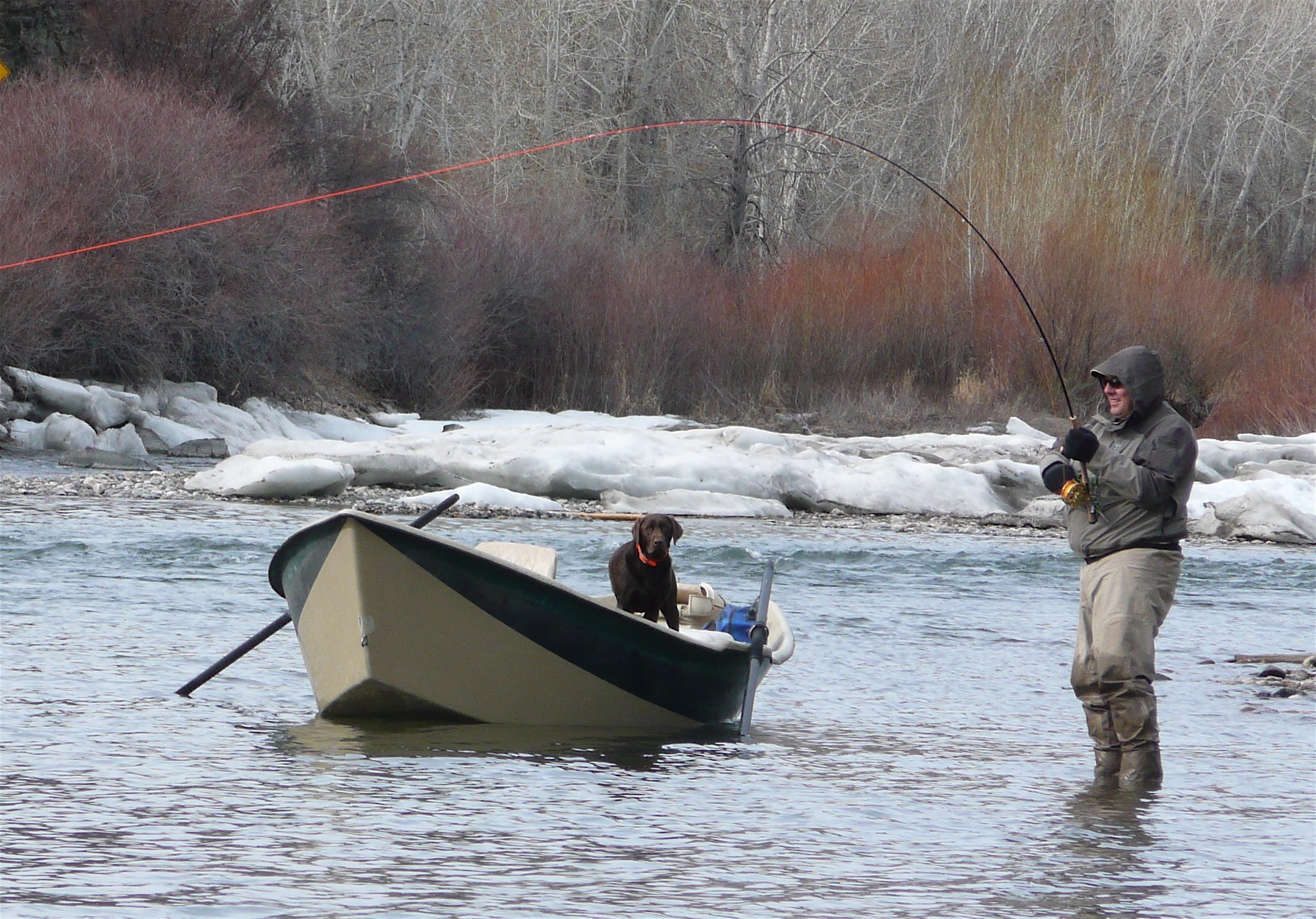 Now that you’re well-rested and know what to try on fish, here’s where to find them. See Fish and Game's Fishing Planner to learn more about each location.

Boise River: Don't overlook this river during late season because low winter flows actually make it more accessible and wader-friendly than during summer. It has healthy populations of rainbow trout, whitefish and brown trout. But don't expect gullible fish because they experience a lot of fishing pressure.

South Fork of the Boise River: This popular stretch below Anderson Ranch Dam doesn't get any less popular during winter. Water coming out of the reservoir provides stable conditions and thousands of trout per mile make it a destination for late season anglers. Trout and whitefish tend to be above-average in size.

Payette River (Banks to Horseshoe Bend): This section of the Payette River supports a tremendously diverse fishery, including mountain whitefish. Whitefish will readily take a well-presented bait, fly or lure, they’re scrappy when hooked, and they’re tasty, yet admittedly, a little bony. Anglers have many access points along this stretch of river.

Big Wood River: This river has long been popular during winter for catch-and-release trout fishing. It rarely freezes, and if you fish it on the right day, you can catch trout on dry flies. Bring your midge and baetis patterns.

Malad River: This spring-fed stream is a fun winter fishing spot because it's easily accessible from the Hagerman area and has lots of trout. Bring your light tackle because they tend to run small, but they're plentiful and fiesty.

Lower Lochsa, and Selway rivers: All provide good opportunities to catch whitefish during winter, and also have catch-and-release trout fishing.

North Fork of the Coeur d'Alene River: Lower section also has fishing for whitefish and cutthroat trout and is accessible during winter.

Snake River below American Falls: This section of the Snake has produced some excellent trophy trout fishing in recent years, and there are plenty of others. The relatively mild climate and dam release keeps this fishing accessible and productive during winter.

Snake River (Tilden to Shelley): This section is slated to get nearly 40,000 rainbow trout stocked in November. Several thousand fish will be released near Tilden, Blackfoot, Firth and Shelley.

Portneuf River: Upper section is your best bet, and Fish and Game provides several access areas so you can get to the river.

South Fork of the Snake River: This has year-round trout fishing and there's no limit on rainbow trout. There's also lots of opportunity to catch whitefish during winter. 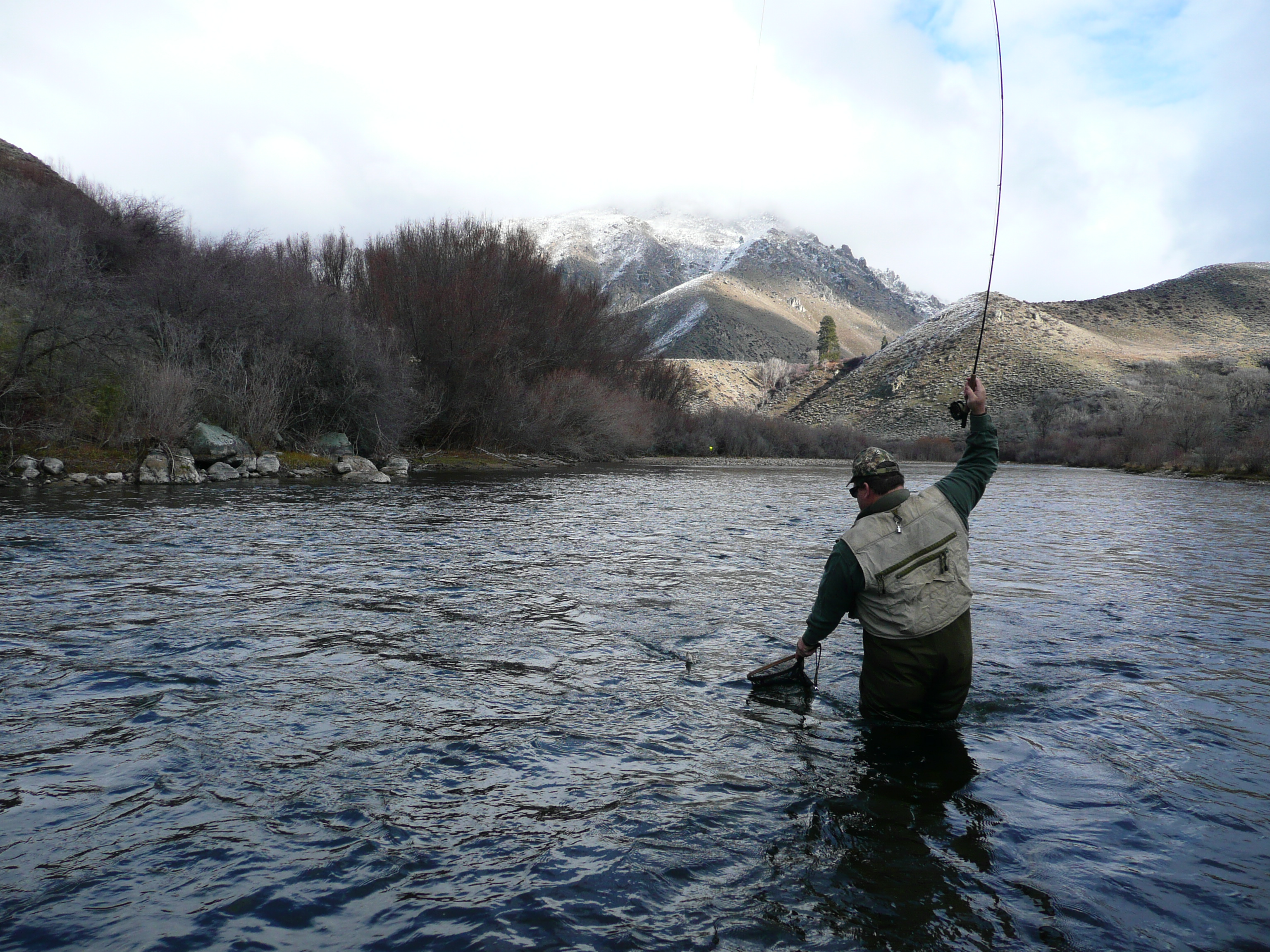