Information on Grizzly Bear conservation and management in Idaho. 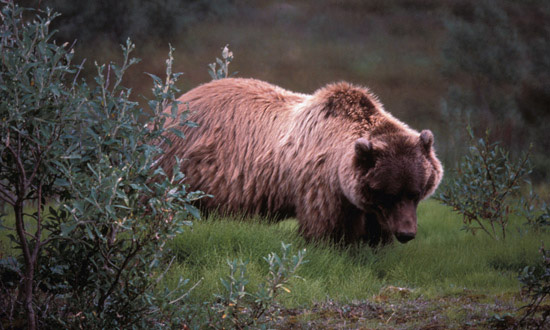 Grizzly Bears in the Wild

Grizzly bears historically lived in every part of Idaho. Now they are only found in the northern part of Idaho and in eastern Idaho near Yellowstone National Park. The best grizzly habitat is a forest that has meadows and grasslands mixed within it.

Grizzlies are omnivores who consume among many things, whitebark pine nuts and army cutworm moths. They can eat as many as 40,000 moths a day and can gain up to 30 pounds each week eating these high fat foods.

To find food, grizzly bears have heightened senses. Bears see about as well as humans do, and they see in color. A grizzly bear's hearing is good, but the most important sense for a bear is its sense of smell. A grizzly bear's nose is about 1,000 times more developed than a human’s nose. Bears remember where food and places are by how the place smells.

The color of a grizzly varies from blond to black. They have a large hump between their shoulders. The hump is made of muscle. Adult front claws are 2-4 inches long, light colored and slightly curved. They can weigh between 200 to 600 pounds and are three and a half to four feet high at the shoulder and six to seven feet when standing on their hind feet.