What is a Steelhead? 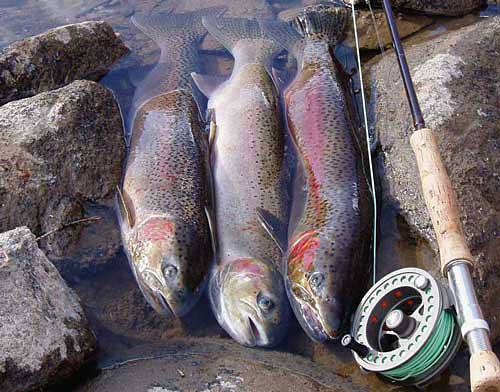 Steelhead are native rainbow trout, which migrate to the ocean as juvenile fish and return to fresh water as adults to spawn.  In Idaho these ocean-going trout are often classified into two groups, A-run and B-run, based on their size and ocean life history.

A-run and B-run Steelhead
Idaho's A-run steelhead are usually found in the Snake and Salmon rivers. They return from the ocean earlier in the year (usually June through August) and they most often return after spending one year in the ocean. Because of their early return and short stay in the ocean they usually weigh 4 to 6 pounds and are generally 23 to 26 inches in length.

The B-run steelhead most often return to the Clearwater River, but some return to tributaries in the Salmon River. These fish usually spend two years in the ocean and start their migration to Idaho later in the summer or fall of the year (usually late August or September). Because of the extra year and the extra summer of growing in the ocean, they return as much bigger fish. Average B-run steelhead weigh between 10 and 13 pounds and are 31 to 34 inches long.

Steelhead grow even larger when they spend a third year in the ocean before they return to Idaho to spawn. These steelhead are usually larger than 37 inches and often weigh more than 20 pounds.

The Idaho state record steelhead was 30 pounds and 2 ounces and was caught in the Clearwater River in 1973.

Fishing Overview
Adult steelhead start swimming into Idaho waters each July. Beginning in August and for the next nine months anglers pursue hatchery steelhead as they migrate up the Snake, Clearwater and Salmon Rivers. Steelhead fishing winds down by the end of May as the fish reach their spawning grounds in Idaho's mountain streams and hatcheries.

When and Where to Fish for Steelhead
Because steelhead are in so many places in the state over such a long period of time, it's really hard to say there is a best time and place to go steelhead fishing. If an angler has a chance to follow the run upstream, the best time could be any month from July or August through May.

The best time to fish steelhead is a matter of personal choice. - the long days of September on the lower Clearwater, a warm October day in the Salmon River canyon, a colder January day in a drift boat near Riggins or Orofino, or enjoying the spring thaw in the Stanley Basin in April. Each month of the year and each location provides a completely different fishing experience.

Angling Techniques
Steelhead respond to a variety of angling techniques such as plunking, bobber & jig, fly fishing, side planer and spey casting. Since steelhead are not feeding as they wait to spawn, the angler pesters the steelhead enough to get it to strike. They're aggressive and will take a variety of bait, lures, and flies. Some anglers prefer plugs, shrimp or fresh roe (fish eggs.)

Life History
Steelhead spawn in streams from mid-April to late June. They use areas of gravel, or cobble, depending on the size of the fish. The female selects a place in a riffle area below a pool to dig a redd (nest). She displaces the gravel with her body and tail, and the male fertilizes the eggs as they are deposited. The female covers the eggs with gravel by continuing upstream and the current carries the gravel over the eggs.

When they mature and are ready to spawn, the steelhead migrate back to the place they were born. They enter the lower river drainages in the fall (Sept.-Oct.) and winter over to spawn the following spring, which allows a fall and spring fishing season. Most require 3 to 5 years to mature.

Feeding Habits
Steelhead trout eat insects and zooplankton in the water or on the surface. They will also feed on small fish and fish eggs. As they get larger, they will eat larger fish. Adult steelhead holding in the river prior to spawning do not eat much, but will strike at food or lures.