Visitors
Visiting hours are 8 a.m. -- 4 p.m. Mountain Time, seven days a week.  If you would like a tour of the facility, please stop by for a visit.  If you have a large group of people, please provide advance notice by calling the hatchery at 208-628-3277.

Please note: The hatchery is now open again to visitors after closure for construction.

Water for the hatchery comes from Rapid River.  The drainage is protected as part of the Wild and Scenic Rivers Act and is not impacted by modern development.  Rapid River generally provides adequate water for rearing salmon, although the steep nature of the drainage makes it a highly variable river.  Spring runoff and flash floods can be violent and carry tons of silt downstream.  Water temperatures also vary considerably.

Fish rearing facilities at the hatchery include a building for egg incubation, 12 outdoor concrete raceways for early rearing and 6 rearing ponds for final rearing until fish are released as smolts.  Holding facilities for adult salmon broodstock consist of one concrete holding pond and one earthen holding pond.  These ponds can hold up to 4,000 adult salmon prior to spawning.

A fish trap is located on Rapid River approximately 1.5 miles downstream from the hatchery.  It traps adult fish migrating upstream.  Adult salmon are transported by a 1,000-gallon tank truck to the hatchery.  The trap facility allows unimpeded migration of anadromous and resident fish when trapping operations are not in progress.

Spring Chinook Salmon
Rapid River Fish Hatchery produces around three million spring Chinook smolts annually as part of Idaho Power’s mitigation program.  Fish spend nearly two years at the hatchery where they grow to a length of 4-6 inches before the majority of these fish are released directly into Rapid River to begin their 45- to 60-day, 600-mile journey to the ocean.  In addition, Idaho Power releases some of these fish into the Snake River below Hells Canyon Dam and some into the Little Salmon River.  One to three years later, they return as adults to Idaho where they contribute significantly to sport and Native American tribal fisheries throughout the Columbia Basin.

Spawning begins around mid-August and is completed by the end of September.  Each female produces 3,500 to 5,000 eggs which are placed into incubators after fertilization.  Beginning in December and continuing through March, fry are moved from the incubators to outdoor raceways.  In June, fish are moved into rearing ponds where they stay until their release as smolts the following March. 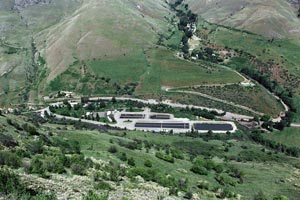 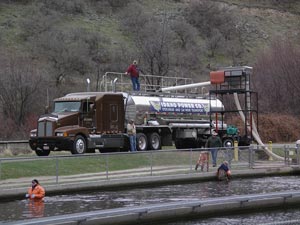