Constructed in the late 1940's, Eagle Hatchery was part of the Idaho Department of Fish and Game's resident trout program until the late 1980's. In 1991, Eagle Hatchery was reconfigured to accommodate the Snake River sockeye salmon captive broodstock program. This program was initiated to prevent the extinction of Idaho sockeye salmon and to conserve critical genetic information. Snake River sockeye salmon were added to the federal endangered species list in 1991. The program is 100% funded with federal dollars provided through the Bonneville Power Administration.

Site Overview
The hatchery consists of an incubation and early rearing building in addition to outside rearing locations that have been converted from cement raceways to circular tanks. In 2007, an additional building was constructed for rearing of the sockeye captive broodstock.  The original building is now used as isolated holding and spawning for anadromous sockeye which are incorporated into the hatchery captive broodstock. Eagle Hatchery receives water from three pump-assisted artesian wells. A maximum of six cubic feet per second of 13.5ºC (56.3ºF) water is available for production. Two water chilling systems are in place to meet specific incubation and rearing objectives. A settling pond treats water prior to discharge to the Boise River.

Visitors
The hatchery is a popular visiting site for the casual public as well as local schools and interest groups. Visiting hours are 8:00 am to 3:00 pm daily; tours can be scheduled by calling (208) 939-4114. Because of the nature of the sockeye salmon captive broodstock program, organized tours are most appropriate for classes at the junior high level or above. Tour participants can expect to learn some basics about the Endangered Species Act, the status of salmon and steelhead in Idaho, the hurdles that Idaho salmon and steelhead face, and what the Idaho Department of Fish and Game is doing to maintain and rebuild populations.

Species Production
The hatchery acts as a remote spawning and rearing location for Snake River sockeye salmon. Adult sockeye salmon that successfully return to Idaho from the ocean are transferred from trapping locations in the Stanley Basin to the Eagle Hatchery for final maturation and spawning. In addition, Eagle Hatchery produces its' own captive adults for spawning. Eggs, juveniles and adults produced from hatchery spawning events are returned to the wild. An evaluation program is in place to track the relative success of the various release strategies employed by the program. 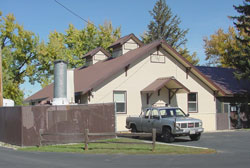 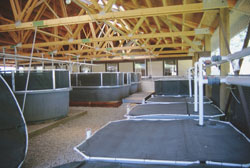 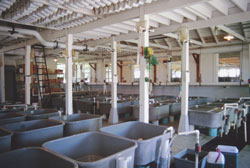