Yew continues to be found in Blaine County despite ordinances that prohibit the plant in many parts of the county.

Despite a 2016 Blaine County ordinance restricting the planting of noxious plants, including exotic yew, a bull moose was found dead in the backyard of a residence on Tuesday January 17, 2023, after eating the toxic plant north of Ketchum. A field necropsy was conducted by a conservation officer who confirmed that the moose had consumed yew found in the backyard of the home. The officer also noted that he found the overall body condition of the moose, as measured by the amount of body fat, was good.

During the winter of 2021 – 2022 over 20 elk died as a result of eating ornamental yew throughout the Wood River Valley.

Several plant species are toxic to wildlife and pets, especially those in the yew family.

Residents should inspect the landscaping around their homes and remove all yew plants in an effort to keep wildlife and pets safe, especially during winter months when wildlife moves down into historic winter range, now occupied by community neighborhoods and private residences.

Yew plants are evergreen, even in winter, which is thought to be the reason that reports of wildlife eating the plant seem to be more common during winter months. 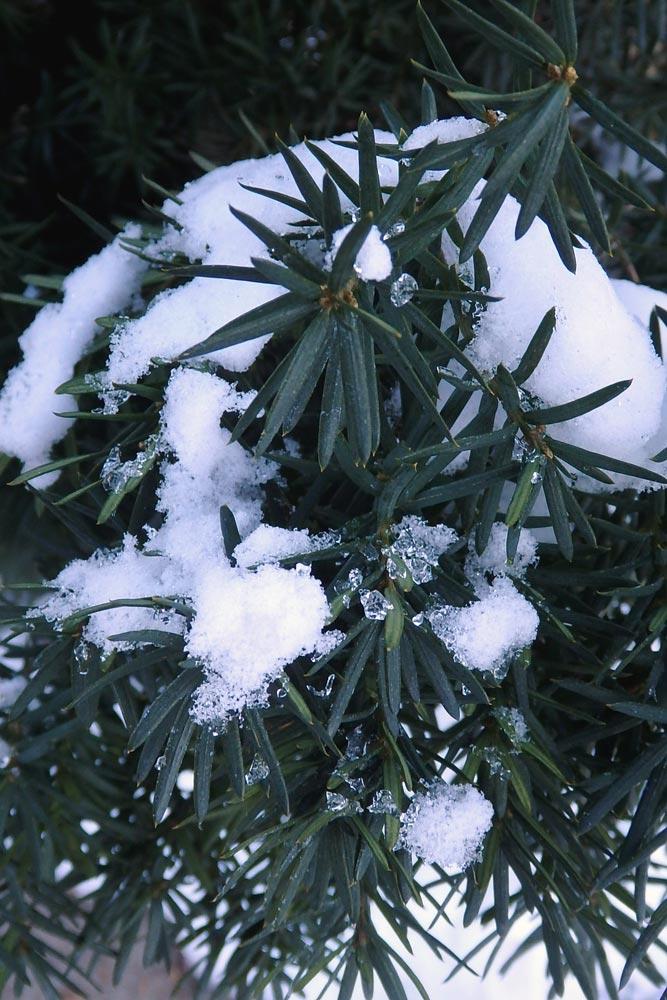 Image Caption
Even in winter, yew is evergreen which may attract wildlife to eat the plant.

Homeowners should completely remove any yew from their yards. If removal is not possible until spring, the bushes should be securely fenced so that wildlife cannot get access to the plants, or the plants should be tightly wrapped with burlap.

According to Regional Wildlife Manager Mike McDonald landowners need to be aware of the types of vegetation they purchase and plant on their properties. “I realize that it’s hard to dig up mature landscaping but everyone needs to do the right thing for wildlife, and even to protect your pets, by removing plants like exotic yew. It takes a surprising small amount of yew to kill an elk, deer or moose, which are all species that residents can see throughout the valley, almost daily.” 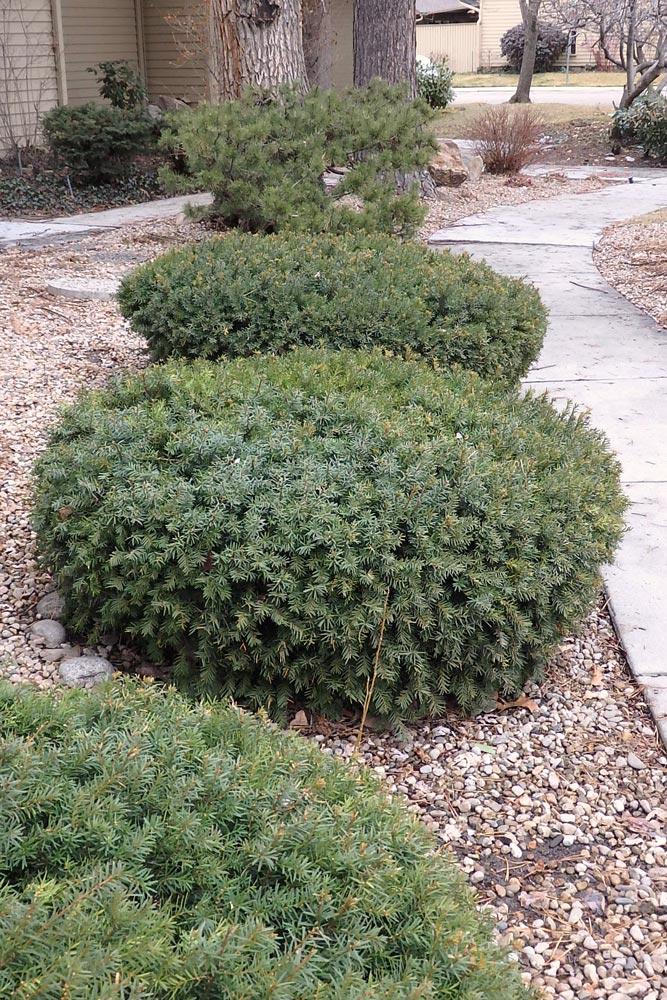 Many plants contain toxic chemicals which may be dangerous to humans, pets, and wildlife.  Yew is an evergreen tree commonly used in ornamental plantings or landscaping that contains highly poisonous chemicals known as alkaloid taxines. Two species of yew, Japanese and European, are particularly toxic.

All parts of ornamental yews except the arils, the material that covers the seeds, contain the toxic alkaloids. The arils are edible and sweet, but the seed is dangerously poisonous.

The yew seeds are eaten by thrushes, waxwings and other birds, which digest the soft fleshy covering of the seed and disperse the hard seeds undamaged in their droppings.

In mammals, the digestive process can break down the leaves or seed coat and release the taxines into the body. This can have fatal results if yew berries are eaten without removing the seeds first.

Grazing animals, particularly cattle and horses, are also sometimes found dead near yew after eating the leaves. Dried branches can be fatal.

Ornamental yews and related plants are toxic to a variety of animals including horses, cattle, dogs, cats, rabbits, birds, deer, elk, and humans.

Ornamental yews are highly toxic with only a small handful of needles needed to kill horses, elk or dogs. 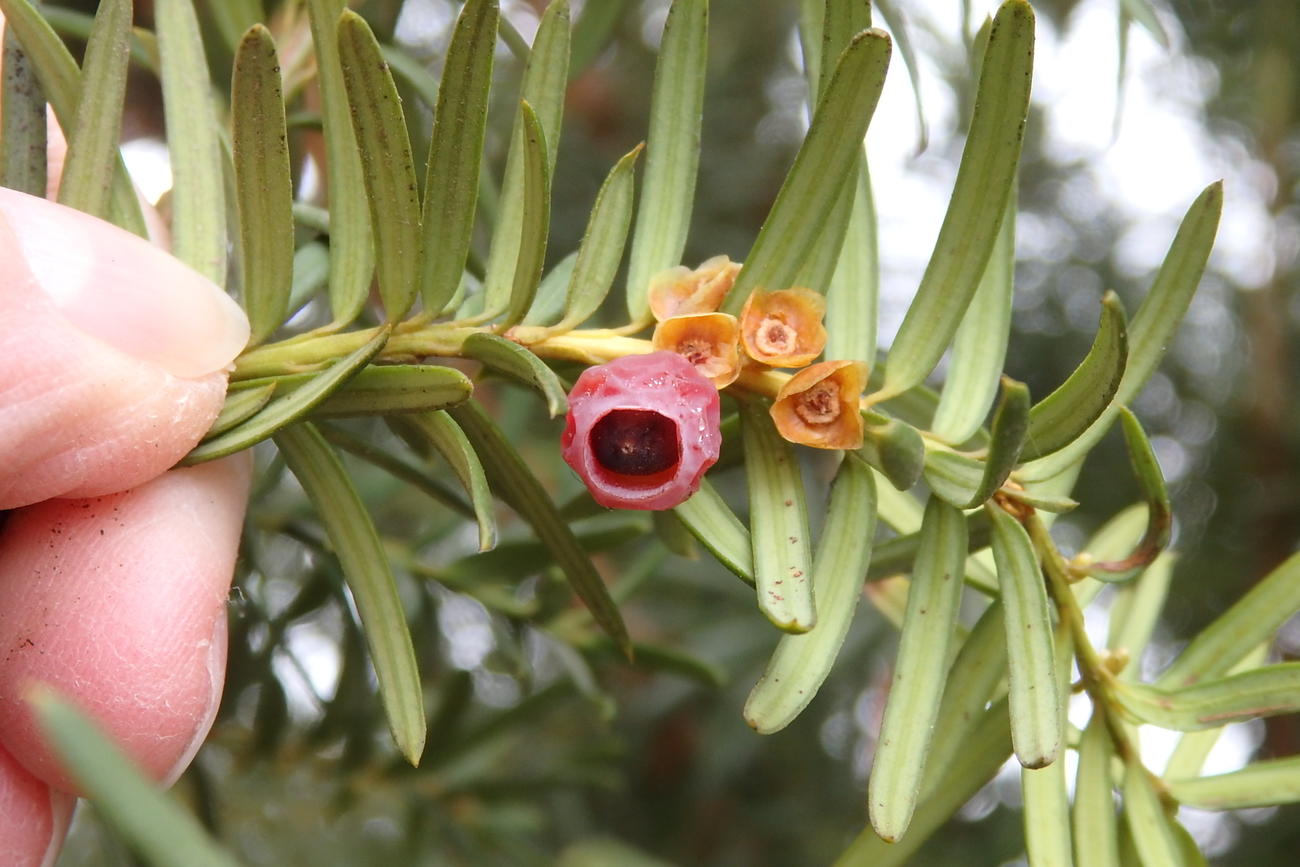 Image Caption
All parts of the yew are toxic, except the fleshy red berry, or aril.

The ordinance is a response to the fact that during the winter of 2015 and 2016 foraging wildlife consumed toxic yew plants in residential areas that led to the death of at least twenty elk throughout Blaine County.

Yew has been blamed in the death of untold numbers of wildlife across Idaho over the past several years with deer, elk, moose and pronghorn falling victim to the toxic plant.

The Board of Blaine County Commissioners found that toxic yew plants pose an imminent danger of injury to wildlife and a more broad danger to pets and livestock. Therefore, the Commissioners took the action of eradicating toxic yew plants from residential areas to promote the public health, safety, and welfare.

The Ohio Gulch Transfer Station accepts yew debris free of charge, but the yew must be separate from other yard debris. Due to the extreme toxicity of yew, proper removal includes removing all traces, no matter how small, of the plant.