What Is White-Nose Syndrome

White-nose syndrome (WNS) is a disease that is identified by the telltale white fungus growing on the noses of some infected bats while they hibernate.  Mold-like fungus from a recently described fungus, Geomyces destructans, may appear on the wings, ears and/or tail membranes of afflicted bats, but the fungus can be present without being visible.

Infected bats may arouse from hibernation possibly due to thermoregulation problems due to the fungus or to loss of body fat and in doing so prematurely burn up their fat stores and starve to death during mid–winter.  WNS has killed large numbers of bats, sometimes threatening whole wintering populations of bats, in the eastern U.S. as they hibernate in caves or mines.

White–nose syndrome is not well understood and scientists are investigating all potential aspects of this mysterious disease.  One popular hypothesis focuses on the fungus itself which is a cold–habitat obligate that thrives from 5 to 15 ºC (41 to 59 ºF) - the same range of temperatures typical of bat hibernacula.  It is known that G. destructans infects hibernating bats when their bodies are cold and amenable to its growth due to immune suppression associated with hhibernation.  The earliest evidence of WNS was at a cave in New York in 2006. Since then, over a million bats have died.

How Cavers Can Help Prevent WNS

Aspects of the geographic spread of white-nose syndrome suggest that humans may transmit the fungus from infected sites to clean, uninfected  sites.  This kind of spread is most likely occurring from clothing and equipment that are not properly cleaned and decontaminated between sites.  Formal testing of the human spread of WNS is ongoing.  Because of the devastating effects of WNS, it is critical that people assume responsibility for the potential spread of WNS.

Please do not use ANY gear or clothing in the west that you have used in caves/bat roosts east of the Mississippi River.  There is a risk that you could spread the fungus that can kill bats in these caves.  Please ensure ALL gear and clothing used in western caves and roosts has been cleaned and disinfected before entering any other caves/roosts in the west.  Soaking equipment for at least 10 minutes in a 10% bleach solution, Lysol all-purpose professional cleaner or Formula 409 is recommended.

Read the U.S. Fish and Wildlife Service Quick Reference for White–Nose Syndrome (WNS) Containment and Decontamination Procedures for Cave Activity. It's a fantastic resource for cavers and following these procedures will help to protect bat populations around the country.

What To Do If a Dead Bat Is Found

Because bats also can be affected by other health problems, including rabies, the Idaho Department of Fish and Game discourages members of the public from handling bats if at all possible.  If you need to dispose of a dead bat found on your property, pick it up with a plastic bag over your hand or use disposable gloves.  Place both the bat and the bag into another plastic bag, close the bag securely and dispose of it with your garbage.

Thoroughly wash your hands and any clothing that comes into contact with the bat.

If you see a band on the wing or a small device with an antenna on the back of a bat (living or dead), contact Idaho Fish and Game as these are tools for biologists to identify individual bats.

If five or more dead bats are found in a small (100 yards) area, please cover the bats with a box, can, bucket or similar container and contact Idaho Fish and Game as soon as possible.  The bats may be collected for diagnostic purposes.

The Idaho Department of Fish and Game is asking the public to report the sighting of any active or dead bats during winter.  Please call 208-454-7638 to report sightings.

Idaho Fish and Game would also like to know of any sites that have hibernating bats so biologists can include them in the monitoring effort.  Finally, the public is asked to not disturb hibernating bats and to respect cave closures.

Working With or Collecting Bats

Anyone interested in working with and collecting bats is required to follow the Idaho Department of Fish and Game’s guidelines in order to get a permit. 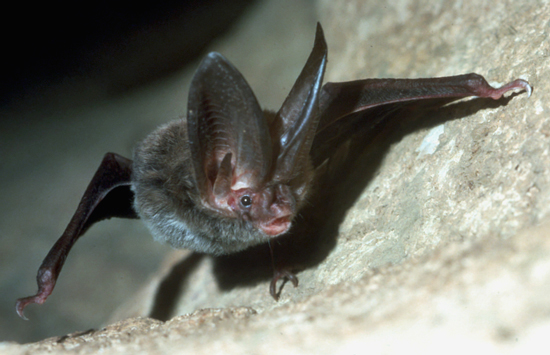