In March 2009, an approximately 9 month old male mule deer was reported to be weak with alopecia in a homeowners yard in Riggins, Idaho.  When investigated, the deer was found dead and transported to the Wildlife Health Laboratory for necropsy.  At necropsy, the deer had bilateral alopecia and broken hair on the thorax and abdomen.  The deer was emaciated with no fat depots.  The deer had evidence of pneumonia and thousands of lice were found on the carcass.  The lice were identified as Bovicola tibialis, an exotic louse not previously reported in Idaho.

Lice have been commonly reported in cervid species, including mule deer (Odocoileus hemionus) and white-tailed deer (O. virginianus). In North America, the most common lice species reported on deer are sucking lice, Solenopotes ferris, and chewing lice, Tricholiopeurus lipeuroides and T. parallelus. These species have been associated with hair loss in some locations.  These lice on native deer appear to undergo cyclic population fluctuations with minimal numbers in spring and summer and large population eruptions in late winter (Samuel and Trainer, 1971).

A number of exotic lice have been introduced to North America with the introduction of exotic deer and antelope (Samuel et al. 2001) including Bovicola tibialis and Damalinia (Cervicola) forficula, among others.  The typical native hosts of B. tibialis and Damalinia (Cervicola) forficula are fallow deer (Dama dama), and axis deer (Axis axis) and hog deer (S. porcinus), respectively.  Both of these lice species have been documented on feral fallow and axis deer on Point Reyes National Seashore in California, possibly as early as 1970, but confirmed again in 2005 (J. Mortensen, per. comm.).  Black-tailed deer with hair loss in British Columbia during the 1940s were found to be infested with B. tibialis (Bildfell et al. 2004) and the same louse was found on large numbers on captive black-tailed deer in Mendocino County, CA, in the 1970s (Westrom et al. 1976).  Introduced fallow deer were associated with both of these incidences of exotic lice on black-tailed deer.  Re-examination of lice from the voucher specimens of lice from the Pacific northwest have found some misidentification of some specimens, with B. tibialis being found, possibly in association with hair loss similar to that reported more recently in Washington and Oregon (Bildfell et al. 2004).

A syndrome of hair loss and juvenile morbidity and mortality in Columbian black-tailed deer (Odocoileus hemionus columbianus) in western Washington was recognized in 1995-97 (Foreyt et al. 2004).  Initially, reports of mortality in alopecic deer were attributed to poor nutrition and high parasite loads (Bender and Hall 2004).  An exotic louse, Damalinia (Cervicola) forficula, was identified on black-tailed deer in Oregon and postulated as the cause of the hair loss syndrome (Bildfell et al. 2004).  After initial identification as a recognizable condition in black-tailed deer in western Washington,  the hair loss syndrome appeared to spread north, east and south from Washington into British Columbia, central Washington and western Oregon (Bender and Hall, 2004; Bildfell et al. 2004).  Deer population declines in both Washington and Oregon have been associated with high infestations of this louse and the associated hair loss in late winter, especially in fawns (Bildfell et al. 2004).  Over-winter fawn mortality in populations affected with hair loss syndrome varies from 20-100% and has resulted in significant reductions of local populations (Bender and Hall, 2004).  This louse can be experimentally transmitted from infested black-tailed deer to mule deer with close confinement and contact (Robinson 2007).

More recently, B. tibialis, evidently originating from local fallow deer, has been found on wild mule deer in poor body condition in central Washington starting in 2007-08 (Mansfield, per. comm.).  This louse appears to cause a similar hair-loss syndrome in mule deer similar to that reported for black-tailed deer infested with Damalinia (Cervicola) forficula.  Population declines have been observed in mule deer with hair loss syndrome in Washington.

Mule deer found it and adjacent to the city of Riggins have been and continue to be infested with B. tibialis and continue to exhibit some degree of morbidity and mortality in the local area. Based on observations by IDFG personnel during winter of 2009-10 and 2010-11, the extent of the infestation is increasing, both in numbers of deer affected and the geographical locations of affected deer.  Over the winters of 2009-10 and 2010-11, several mule deer in Riggins were marked with plastic ear tags to enable repeated observations of individual animals.  These observations suggested that the proportion of deer affected with hair loss has gone from about 25 to nearly 80% and that over time, more groups of deer in Riggins have evidence of hair loss in late winter associated with lice infestations.    A pilot treatment program was conducted on some of the marked deer in winter 2010-11.  Ten deer were anesthetized, given orange ear tags and treated with ivermectin (2 ml/100 lb).  Marked deer were relocated on monthly intervals and retreated when and if they could be found.  Treatment was effective in limiting the extent of the hair loss and reducing lice numbers in these deer.

Treatment programs for external parasites on deer are not common.  For this particular louse, the California Department of Fish and Game captured ten mule deer and treated them with Cydectin Pour-On (5.5 ml/120 lb) and an insecticide impregnated plastic ear tag in late December 2009.  Nine of the 10 captured deer had lice (Bovicola spp. and/or African blue lice, Linognathus africanus) although numbers were low.  Deer were recaptured in May 2010 and six of 10 marked deer did not have lice.  Only one of 10 control deer did not have lice in May 2010.  Oregon and Washington have not tried to control lice in any deer populations because the louse is too widespread across the landscape to effectively implement a control program.  Treatment with Ivermectin appears to limit lice numbers on artificially infested, captive black-tailed and mule deer (Foreyt et al. 2004).  Treated animals re-grew hair and gained weight, but could be re-infested after contact with an infested deer.

Given the reported population declines of black-tailed deer and mule deer with both Damalinia (Cervicola) forficula and B tibialis in Oregon and Washington, it is important that some management actions be taken to limit the spread and impact of this louse on deer in the Riggins area so that it does not spread to and negatively impact other mule deer populations in Idaho.

Management of this louse will depend on reducing the deer population.  However successful management of the louse in Riggins is complicated by the large number of deer in and around the town and the dichotomy between residents that like the deer and those that do not.

From a disease perspective, it is prudent to attempt to control or eliminate the lice in this population to prevent its spread to adjacent deer populations.  Given the relatively local nature of the infestation currently, it is important and timely to consider management options to control the louse infestation in this deer population.  Management options to consider include youth hunts, targeted depredation hunts, extra doe tags, but results will be highly dependent on land owner cooperation and access to private land.  If deer numbers can be sufficiently reduced, a lice control and eradication program may be feasible, both in logistical terms for the number of deer to treat and the cost of such treatment.  Since this louse is spread by direct contact, city action to prohibit the deliberate feeding of deer and to encourage homeowner to reduce the availability of browse (shrubs, trees, orchards, garden plants) with strategic fencing or using plants that are not attractive to deer will help to reduce the numbers of deer that reside in Riggins.

To control the numbers of deer in Riggins, a number of management options are available and have been considered by regional personnel.  Youth or depredation hunts can be implemented to affect the numbers of deer outside but immediately adjacent to the city limits.  The biggest challenge to these hunts is access to private land in and around Riggins, which is difficult and limited.  Limited access to private land will likely result in minimal numbers of deer removed.  A mule deer doe season could also be used to reduce deer numbers, but again, access would likely limit the numbers of deer removed.  Culling affected deer within the city limits of Riggins or on private property immediately adjacent to the city limits using USDA WS personnel is an option for reducing deer numbers.  The positive aspects of this approach are that it appears to be a more efficient and expedient means of reducing local deer numbers than hunting.  Additionally, carcasses would be available to access lice numbers and other health parameters and meat could be returned to the community food banks.  The biggest challenges are similar to those for hunting- access to private land and establishment of safe shooting zones.  If deer numbers can be reduced to the point that a treatment program might be feasible, likely less than 20 animals, it should follow the culling operation(s).  A treatment program would require treating each deer once per month for 3 months with a biobullet containing Ivermectin. Treatment programs are time and logistically challenging, but may be the final way to gain control of this exotic louse in the local area.  Treatment programs may allow some public acceptance of the culling program.

A preliminary proposal from USDAS WS to remove up to 40 deer in January and Feburary 2012 for approximately $10,000 is under consideration by regional and headquarters IDFG personnel.  If deer numbers cannot be reduced enough in the initial culling operation, additional culling operations will be needed at additional expense.   Further surveillance for the presence of lice using deer with visible ear tags and radio collars may be needed after initial management efforts to determine if further actions are needed in the same time frame or in future years to control the lice and its potential spread to adjacent areas. 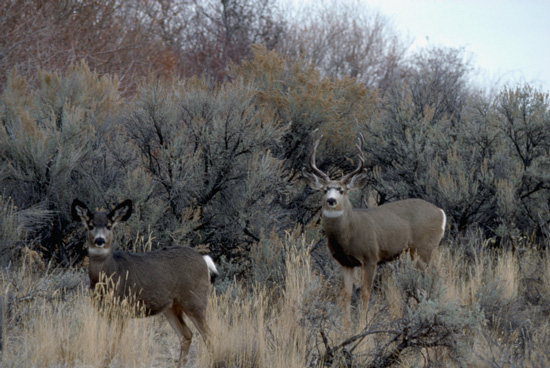