One too many bighorns leads to more than $11,000 in penalties

A successful bighorn sheep hunt in the canyonlands of Owyhee County is a thing to be celebrated. But for a Parma man and his wife, that celebration eventually led to lawlessness.

In 2017, only one bighorn sheep hunt tag was allotted for hunt unit 40, an area encompassing the vast southwest corner of Idaho. Thirty-nine people applied for the coveted tag, which ultimately was awarded to Susan Willmorth (58) of Parma. Guiding her on this hunt of a lifetime was her husband, Joe Willmorth (49). Several weekends of scouting led the pair to a rugged, isolated area deep in the heart of the Owyhee Canyonlands. In late September, Susan bagged a fine, trophy bighorn sheep.

Just days later, Joe and Susan revisited the remote area. The bighorn ram known to them as the “old man” had been Susan’s September quarry; they’d spotted the massive bighorn on several scouting trips. But when the season opened, the old man disappeared.

Multiple days scouting bighorns gave the couple a good idea where the local sheep population lived. And because Susan had the only sheep tag for this remote area odds were low of encountering other people.

On October 6, Joe Willmorth walked into the Fish and Game Nampa office carrying a trophy bighorn sheep head and his wife’s proxy statement. He was there to have the horns measured and an identification pin inserted as required by law. The ram was impressive, and Willmorth claimed that his wife harvested the trophy on October 1. A department staffer measured and pinned the sheep, and took a number of photos of the prize ram. 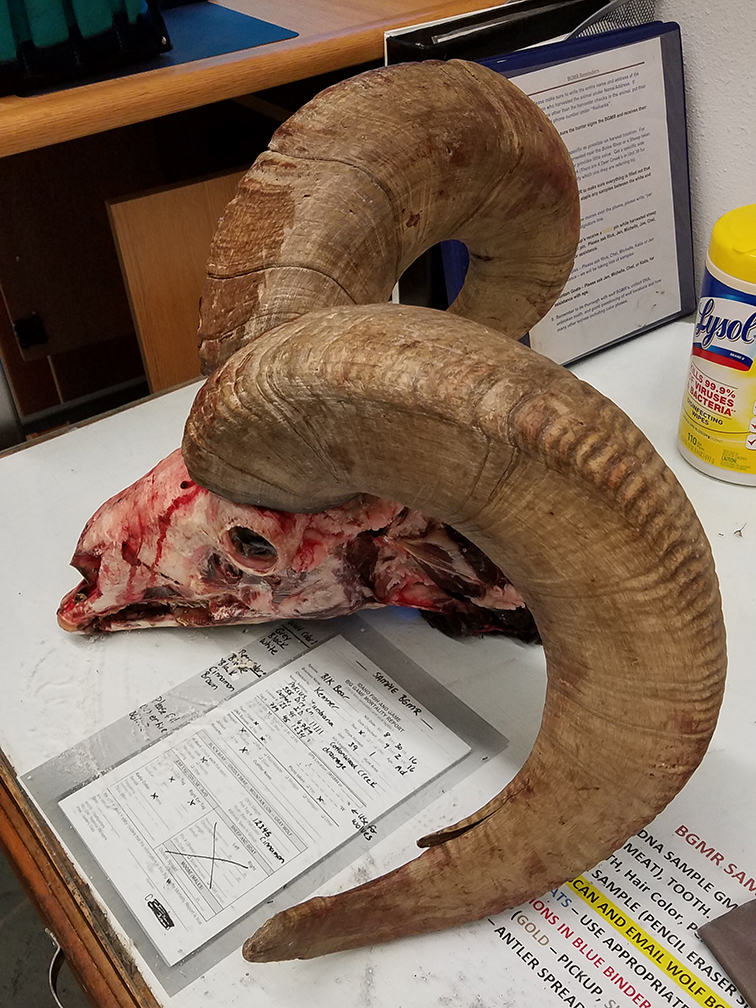 In early February 2018, news reached Fish and Game that all was not right with the Willmorth ram. The ensuing investigation led to a search warrant of the Willmorth residence where the ram checked months earlier at the Fish and Game office was seized, along with a salted bighorn hide, and several electronics. The hide and cell phone images would prove to be the Willmorth’s undoing.

Throughout the months-long investigation, and hours of interviews, Joe and Susan Willmorth consistently denied any wrongdoing. DNA forensics and cell phone photos told a different story. Lab tests proved conclusively that the bighorn hide and horns were from two different sheep. A seized cell phone showed photos of Susan Willmorth posing proudly with her hard earned, freshly-harvested bighorn on September 23. But further into the reel, photos of live sheep appeared, then a close-up photo of a freshly-killed bighorn ram. The date stamp on those photos was October 1. Officers then compared the photo of Susan Willmorth posing with her harvested ram, to photos of the ram checked on October 6, and deduced that they were two different sheep.

The forensic and photographic evidence was enough for prosecutors to file unlawful possession charges against both Willmorths. A plea agreement in the weeks that followed led to the dismissal of charges against Susan Willmorth. Joe opted for an Alford plea, meaning he did not plead guilty to the charges, but acknowledged that the evidence would likely lead to a conviction.

Joe Willmorth appeared before Magistrate Judge Debra Orr in Canyon County court this past November to hear his sentence. For the illegal possession of a bighorn sheep, a $10,000 civil penalty was imposed, along with processing fees, court costs and fines of $1,125. A six-month jail sentence was suspended in lieu of two years unsupervised probation.

Perhaps more painful, Joe’s hunting and trapping privileges, together with an outdoor guide license, were revoked for seven years. This revocation of privileges extends to 48 other states, all members of the Interstate Wildlife Violator Compact. Further, as a condition of his probation, Willmorth may not accompany anyone on any hunting or trapping excursions, or be present in the camp of a hunter or trapper. Doing so would be a direct probation violation and earn Joe a six-month stay in the Canyon County jail.

The trophy ram checked in by Joe Willmorth on October 6 was surrendered to Fish and Game as part of Willmorth’s sentencing. It will one day hang in the Nampa Fish and Game office, together with the story of how it came to reside there. Judge Orr also ordered the Willmorths to forfeit Susan’s bighorn sheep head. As of this writing, that bighorn has not materialized.