Harvest, hunter numbers down for deer and elk in 2019

Fewer animals were harvested than in 2018, and fewer hunters were in the field

The 2019 statewide elk harvest and deer harvests were down about 8 percent and 13 percent from the prior year. The number of deer hunters in Idaho was also down by 5.5 percent from the prior year, while the number of elk hunters remained fairly consistent (down by about 1.5 percent). Success rates dropped slightly for hunters pursuing each species.

Contributing to the drop in harvest, there were about 4,200 fewer mule deer hunters and 3,500 fewer whitetail hunters statewide in 2019 compared with 2018.

“Hunting isn’t unlike fishing — when it’s good, everyone goes,” Fish and Game's Deer and Elk Program Coordinator Daryl Meints said. “When things get tougher, you see the participation drop.”

The white-tailed deer harvest and mule deer harvest were both below their respective 10-year averages, while elk harvest was slightly above. 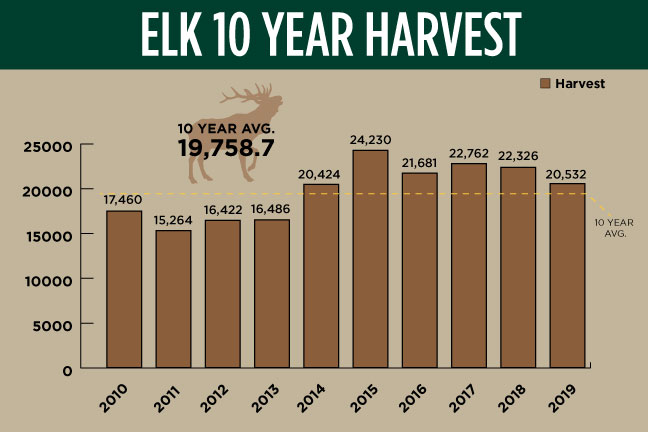 Harvest in 2019 dipped compared with 2018, down by 1,793 total elk, or about 8 percent, but it remained about 4 percent higher than the 10-year average of 19,759. The antlerless harvest dropped 1,885 animals in 2019 compared with 2018. Reductions in antlerless opportunity in a number of regions contributed to the decline in harvest. The 2019 antlered harvest actually increased by 92 animals from the prior year.

The 2019 elk harvest in Idaho was fourteenth highest of all time, and fifth highest in the past decade. 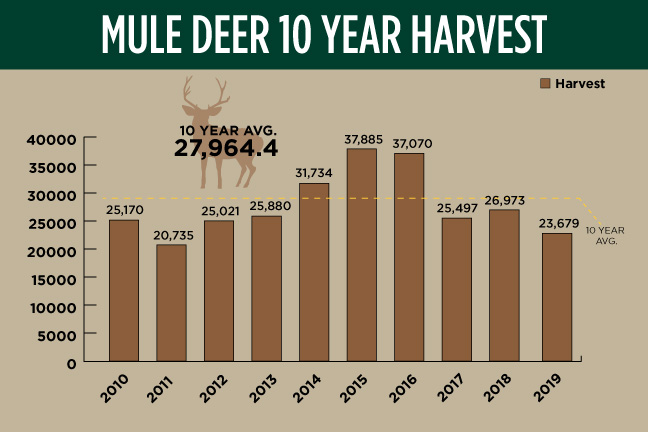 The lower numbers didn’t come as a surprise for wildlife managers in the state.

“Our mule deer populations are driven by survival of fawns and adults, as are our harvest numbers,” Meints said. “The last three-year stretch wasn’t the kindest to our herds, particularly in eastern Idaho and in the Weiser/McCall areas.”

Fawn survival was about average over the 2017-18 winter. But in the winter of 2018-19, deep snowfall late in the season followed by a prolonged wet, cool spring caused winter fawn survival to take a substantial dip for the second time in three years.

“Those last three years make up about 80 percent of the deer on the hill,” Meints said. “When the statewide survival is what it has been for the past three years, this is what it’s going to look like.” 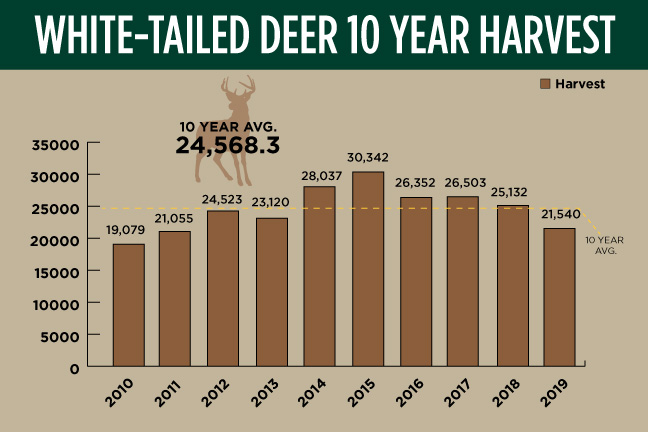 Statewide, hunters took 3,592 fewer white-tailed deer in 2019 than they did in 2018, a decrease of about 14 percent. It was the second straight year of declines in the whitetail harvest. Despite the downward trend, 2019 was still a decent year for Idaho’s whitetail hunters.

The harvest in 2019 fell below the 10-year average of 24,568, but keep in mind, this was a record-setting 10-year stretch for whitetail hunters in Idaho. The all-time harvest record of 30,342 was set in 2015, and eight of the top 10 harvest years for whitetails occurred over the past 10 years. That includes 2019, which narrowly made the top-10 and was the tenth-best season in Idaho history.

The percentage of five points in the antlered harvest was up slightly from 2018, while the overall success rate was down slightly. There were about 3,500 fewer whitetail hunters statewide in 2019 than in 2018. For the hunters who did get out, the weather during the hunting season in northern Idaho — where the vast majority of the state’s whitetail harvest occurs — didn’t do them any favors.

“The biggest fluctuations we see in our whitetail harvest are weather-related. We can see swings of around 10 percent in the harvest in either direction, just based on that,” Clearwater Region Wildlife Manager Clay Hickey said. “When we get weather and snow in the fall, our harvest numbers tend to go up. In 2019, it was balmy, nice weather during the hunting season, which didn't benefit our harvest numbers."