Fish and Game stocks sturgeon, and now the wait begins

Young fish will gradually grow to the size prized by anglers 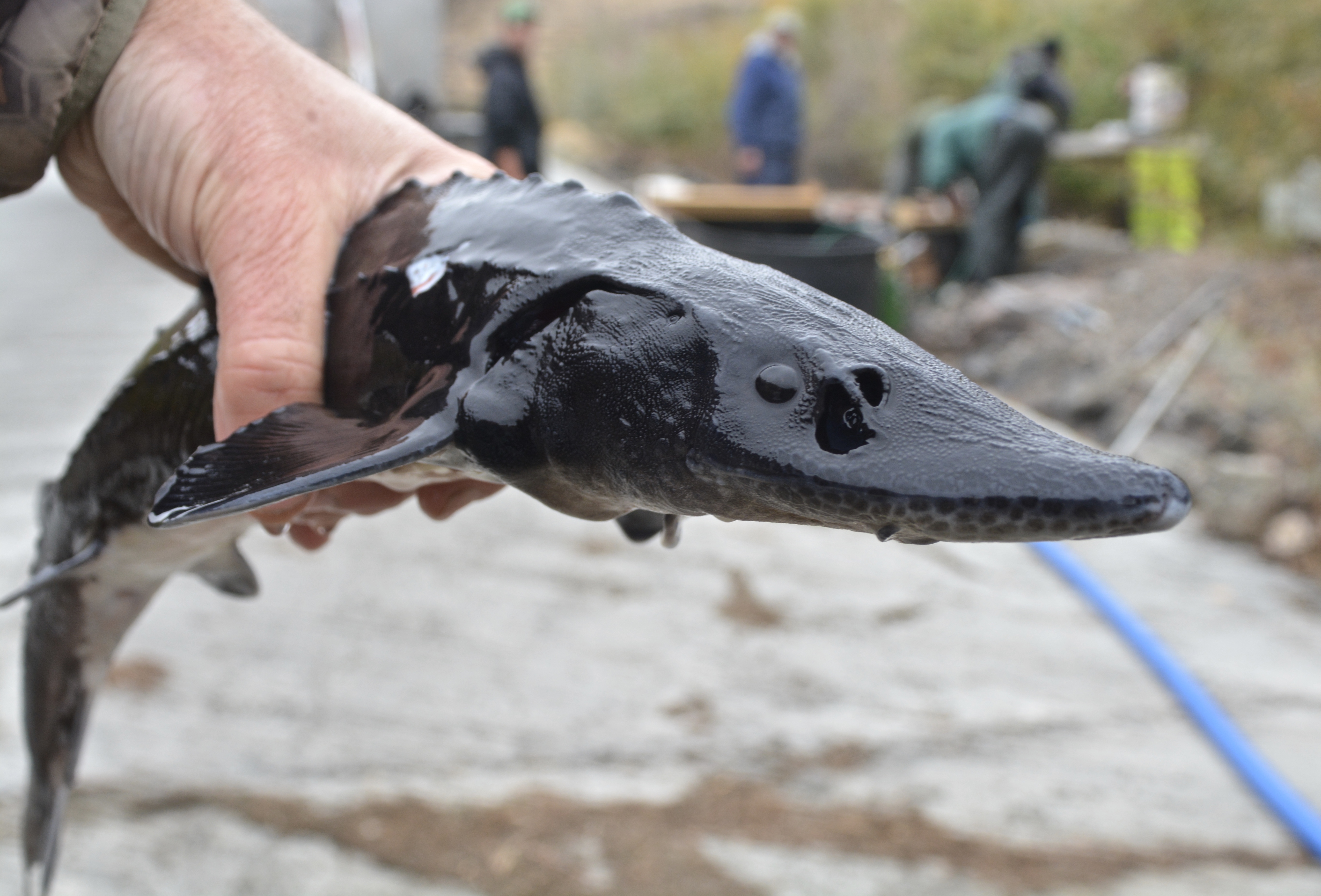 Idaho Fish and Game crews releasing hundreds of 20-plus inch fish into a river typically gets anglers excited about landing a big one, but things are different when it’s stocking sturgeon in the Snake River. Despite being as long as your forearm, the fish stocked were practically fingerlings in the sturgeon world, and it could take up to 30 years for them to reach the 6-foot mark prized by sturgeon anglers.

Fish and Game and Idaho Power are taking the long view with sturgeon in several stretches of the Snake River in southern Idaho.

“You have to have a long-term perspective,” Idaho Power fish biologist Ken Lepla said. “These fish are probably going to outlast all our careers.”

Taking the long view helps when you also consider a sturgeon stocked in the Snake River in 2016 could be caught by an angler in 2066, and that’s not far-fetched because they live for decades. It’s also fun to consider that after you catch and release a sturgeon (which Idaho rules require), future anglers could have the same experience with the exact same fish 50 years from now.

Sturgeon are slow growing (relatively speaking), slow to mature, but provide one of the most exciting fishing experiences in freshwater. The Snake’s largest sturgeon exceed 11-feet and weigh several hundred pounds, and anglers can catch sturgeon throughout the Snake River, even in upper stretches above Shoshone Falls where Fish and Game has introduced them.

But managing a fish species that can live up to a century (possibly longer because they’re notoriously hard to age) is no simple task. 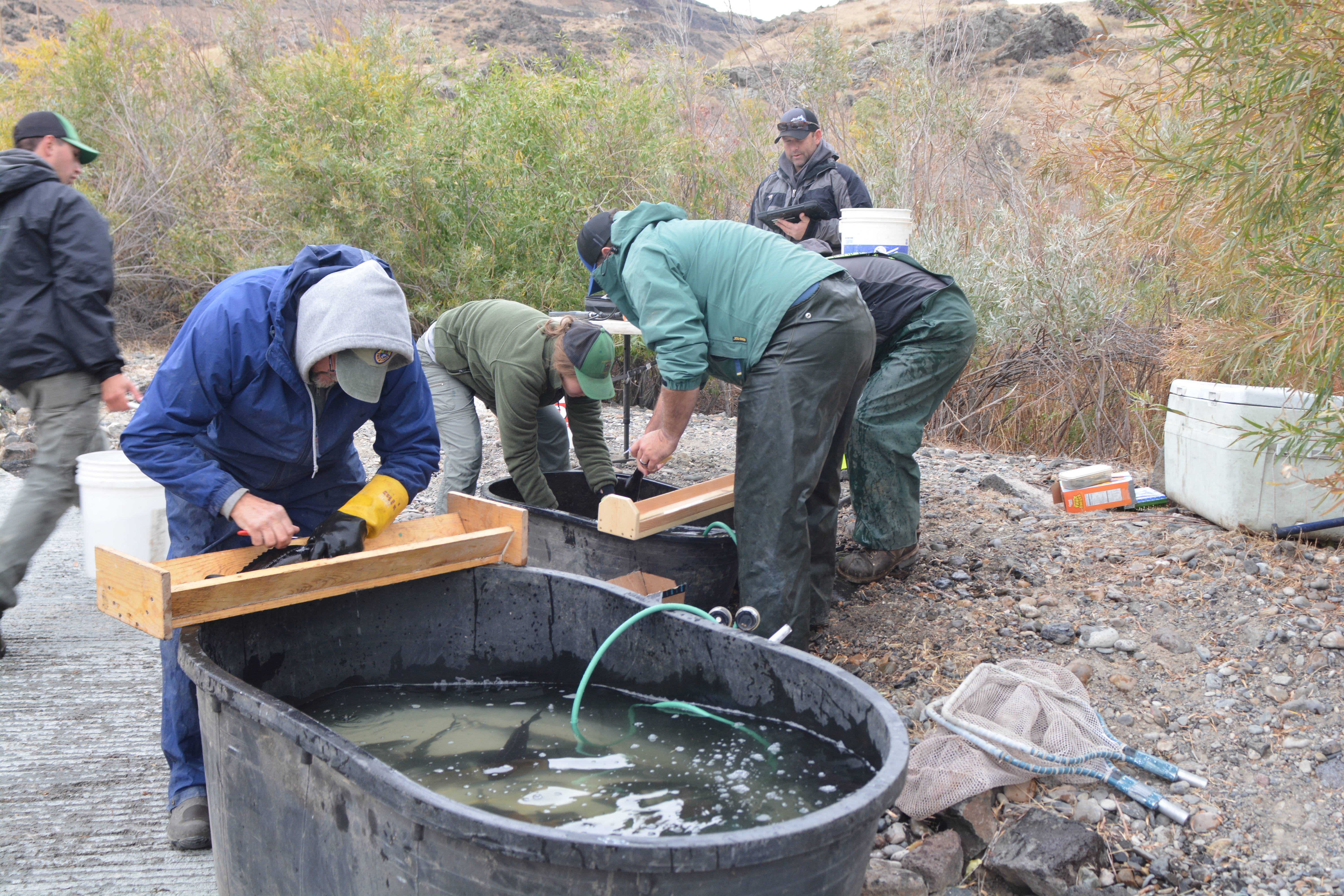 From hare to tortoise

Considering it takes 15 to 20 years for a sturgeon to reach sexual maturity, their young lives get off to a surprisingly quick start. The 2-footers stocked in the Snake River in October were eggs a little more than a year ago.

During spring, adult sturgeon spawn in swift water with each female “broadcast” spawning about 100,000 eggs, or more, depending on their size. Males fertilize the eggs, which drift downstream and lodge in rocks and gravel. They lie there for only about a week before hatching into larvae.

Sturgeon larvae disperse in the river. Biologists are unsure exactly where, but the newborn fish live off the yolk sac for about 2 weeks before foraging for food on their own. In about 45 to 50 days, they’re a few-inches long and mini versions of adult sturgeon.

Within a few years, they’re about 2-feet long and have outgrown nearly all their natural predators, but Fish and Game can cut that to about a year by raising them in a hatchery.

Then their youthful growth spurt slows, and sturgeon grow about 3 to 5 inches per year, depending on water conditions and food availability, and their growth rates slow as they get older.

But even in good sturgeon habitat, less than 1 percent of sturgeon make it from egg to juvenile.

Irrigation and hydroelectric dams have changed a lot of the habitat in the Snake River and much of the Snake River is poor spawning and rearing habitat for the newly hatched fish. As a result, sturgeon only reproduce successfully in a short stretch of river, and even then only every few years.

Help from a hatchery

The sturgeon Fish and Game released into the river got a different start. They were spawned in a hatchery from six wild adults caught in the Snake River and later returned to the river. The project is a cooperative effort between Fish and Game, Idaho Power, and the College of Southern Idaho with help from Idaho’s Aquaculture Association. You can read about that program through an excellent series of articles by Fish and Game’s Martin Koenig.

After being released into the Snake River below Swan Falls Dam and near Grand View, these young sturgeon will hopefully grow and provide a fishing opportunity in a stretch of the river where sturgeon are not naturally reproducing. Conditions haven’t been favorable for natural spawning, especially in stretches of the Snake River that are lacking to critical components, such as high spring flows, rapids and ample gravel beds.

“We need those high flows, and they’re infrequent,” said Lepla, who has worked with sturgeon for most of his 24-year career.

Biologists are learning more about the fish, their full life cycle, and what can be done to improve their populations in the Snake River. 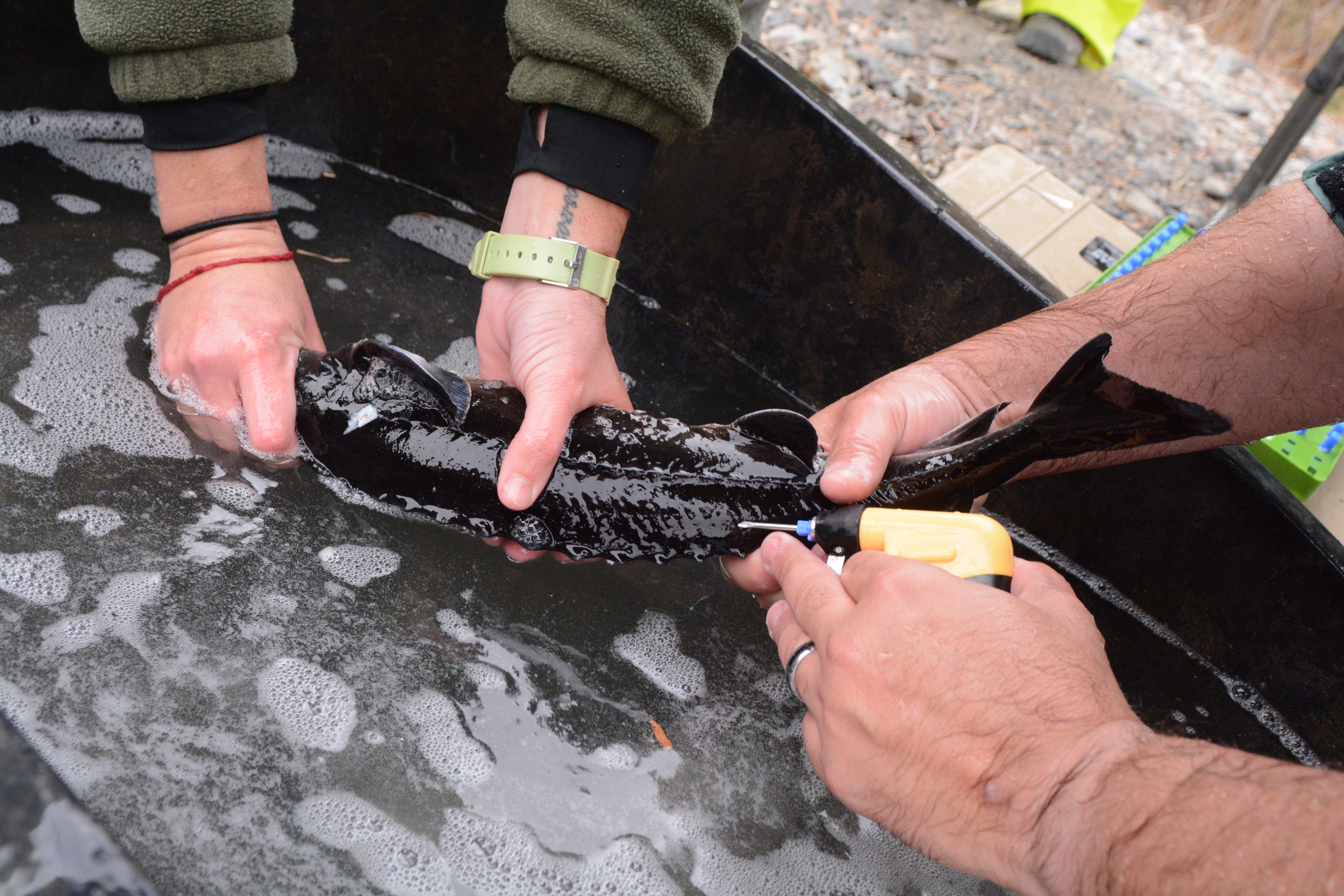 Fish and Game and Idaho Power biologists implanted all the released sturgeon with electronic “PIT” tags, and they also removed a scute, which is the sharp, armor-like bony plate on the side of a sturgeon. If they catch one of these fish during future monitoring surveys, they can easily tell it’s a hatchery fish, and the PIT tag tells them when, where, and how big the fish was when it was released.

Using that data and previously collected data, biologists can estimate growth rates, survival and population sizes in different stretches of the Snake River.

Biologists believe there’s plenty of room for population growth in the Snake River for sturgeon, and below C.J. Strike and below Swan Falls where they’re counted in the hundreds, they believe there’s habitat to support thousands. That’s one reason they’ve been supplementing the existing sturgeon populations with hatchery fish since 2012.

Sparse spawning habitat appears to be the limiting factor in most of the Snake River in southern Idaho, Lepla said, but there’s plenty of food for the river to support more sturgeon, so he’s optimistic about the hatchery-born fish.

“If you bypass that early life stage in the river, they can grow just fine,” he said. 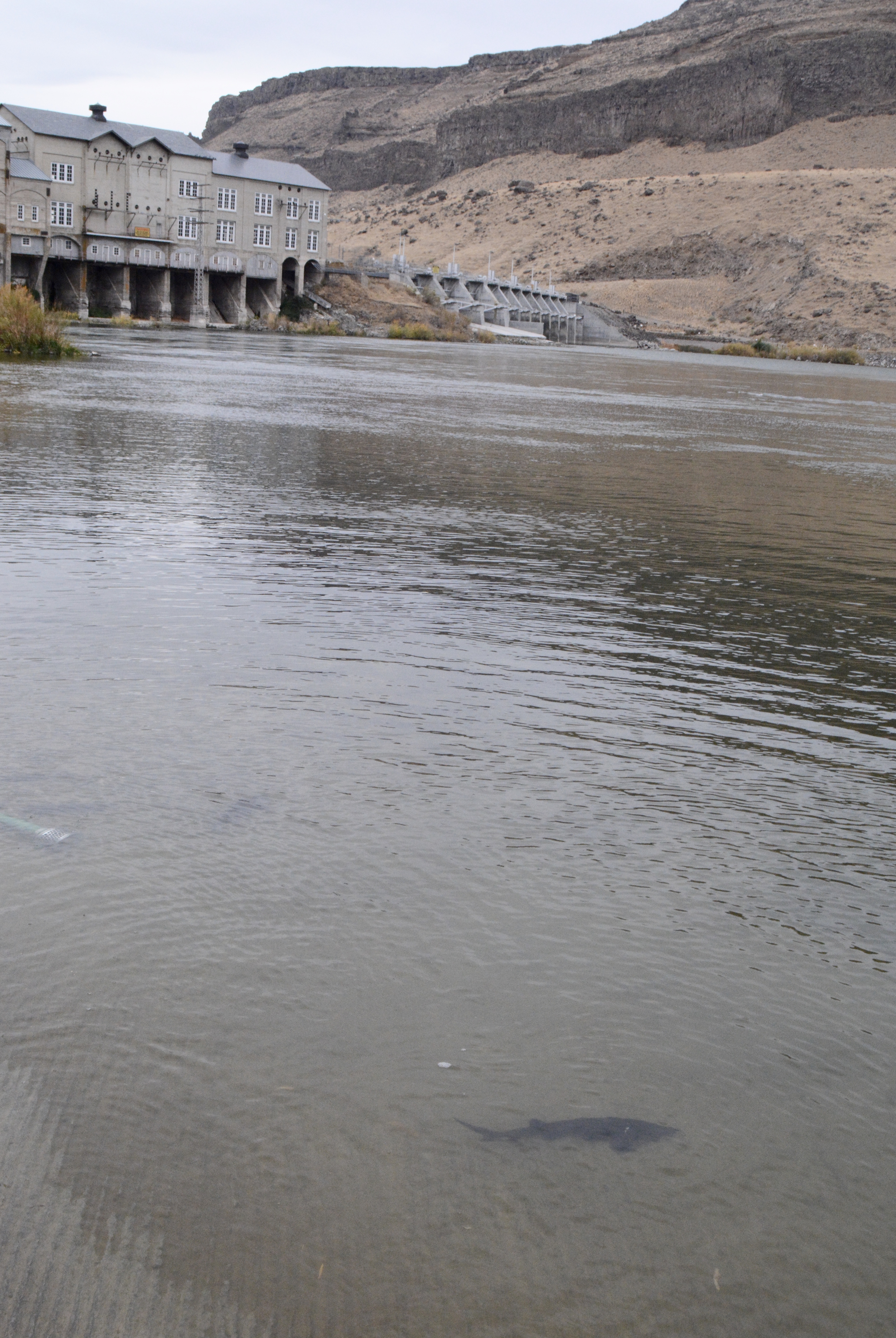 Over the last century, dams have divided the Snake River into sections with little or no way for sturgeon to pass through dams. Dams also regulate flows, often diminishing peak spring flushes that send a torrent of water downstream. Restricted water flows also meant some spawning beds became silted over, and no new gravel is washed downstream by spring floods.

However, there are still sections of the Snake that naturally produce sturgeon. Hells Canyon is probably the most well-known, but the section between Bliss Dam and C.J. Strike Dam also has a healthy, self-sustaining sturgeon population that’s grown in recent years, Lepla said.

Biologists are experimenting there with taking eggs from the river during spawning season and hatching them in a hatchery, then rearing them in the hatchery until they’re large enough to fend for themselves in the river.

Lepla said taking eggs means more genetic variation because they’re coming from a larger pool of parents rather than a small number that are removed from the river and spawned in the hatchery.

Biologists also hope to study whether survival rates of young fish reared from naturally spawned eggs differ from those fully spawned in a hatchery. They’re also trying to figure out what can be done to improve river conditions to enhance natural spawning and rearing in reaches where it isn’t currently happening, or happening with very low success.

Waiting and watching, but still fishing

Biologists are compiling data and patiently learning more about the Snake River’s sturgeon in hopes they can sustain and eventually boost the natural population.

Despite the challenges sturgeon face, they still provide an exciting opportunity to catch a fish you can measure in feet, not inches. In Idaho, sturgeon anglers are limited to catch-and-release fishing, and the fish are so long-lived, they provide a unique fishing opportunity that anglers have enjoyed for decades, and should enjoy for decades to come. 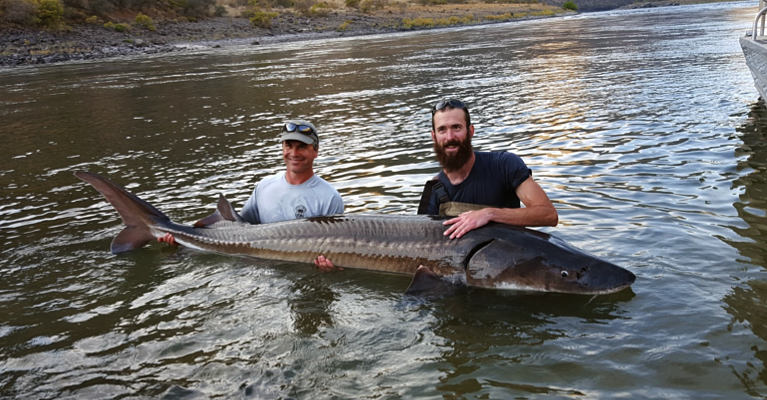 Anglers ply the Snake’s deep holes and wait for one of the torpedo-sized fish to take their bait and give them an arm-cramping round of tug o’ war. Fish and Game encourages anglers to take advantage of that opportunity, and with a little luck, the young sturgeon will eventually join the ranks of giants.

“They’re out there to provide a unique fishing opportunity and to maintain populations in these individual river sections; that’s the purpose of the program,” said Fish and Game’s Regional Fisheries Biologist Mike Peterson. “If you catch one, keep it in the water, take a picture, then release it so it can continue to grow and provide opportunity for the next person.”

Suggested captions:
1. Young sturgeon is ready for release with its scute removed above its pectoral fin for easy identification later.
2. Fish and Game and Idaho Power biologists and technicians mark, measure, weigh and implant an electronic “PIT” tag in each sturgeon before it’s released.
3. The electronic “PIT” tag stays with the fish throughout its life and provides identification. Biologists who catch it in the future can identify it through the PIT tag and know know its size and weight when it was released.
4. Irrigation and hydroelectric dams have changed a lot of the habitat in the Snake River and much of the Snake River is poor spawning and rearing habitat for the newly hatched fish.
5. Fish and Game crews cradle an adult sturgeon from the Snake River. The fish can grow upwards of 11 feet and weigh several hundred pounds.