Deadline to apply for Super Hunt is May 31, and here is how one winner fared in 2020

Think drawing a Super Hunt can’t happen to you? Consider that some lucky hunters will draw those tags and have the freedom to participate in Idaho’s best hunting opportunities. Keep reading to learn about one hunter who became a believer after his name was drawn.

But if you’re not familiar with Super Hunts, they allow the tag holder to hunt in any unit open for the species in which the tag is valid. Simply put, a deer tag is good for any deer hunt in the state, general or controlled, and the same for elk, moose and pronghorn tags. You can buy as many entries as you’d like for $6 per entry for a single tag and $20 for a Super Hunt combo entry, and you don’t have to buy a hunting license first.

To learn more, and buy your chances to win, go to https://idfg.idaho.gov/superhunt.

Part of what makes Idaho’s Super Hunts unique is they give you so much freedom to take advantage of Idaho’s diverse big-game hunting opportunities.

Want to use it to hunt a controlled unit with fewer hunters in the field to compete with? Go for it. Maybe you know a promising general hunt unit and want to try that, too. It’s fair game because you can use the Super Hunt tag for any early-season hunts, late-season hunts, archery, muzzleloader, short-range or any-weapon season. The possibilities are nearly endless, and hunters can tailor their season to their skills, needs and desires.

Here’s what one Super Hunt elk tag winner did in 2020 after only two years of applying and purchasing just 10 entires. 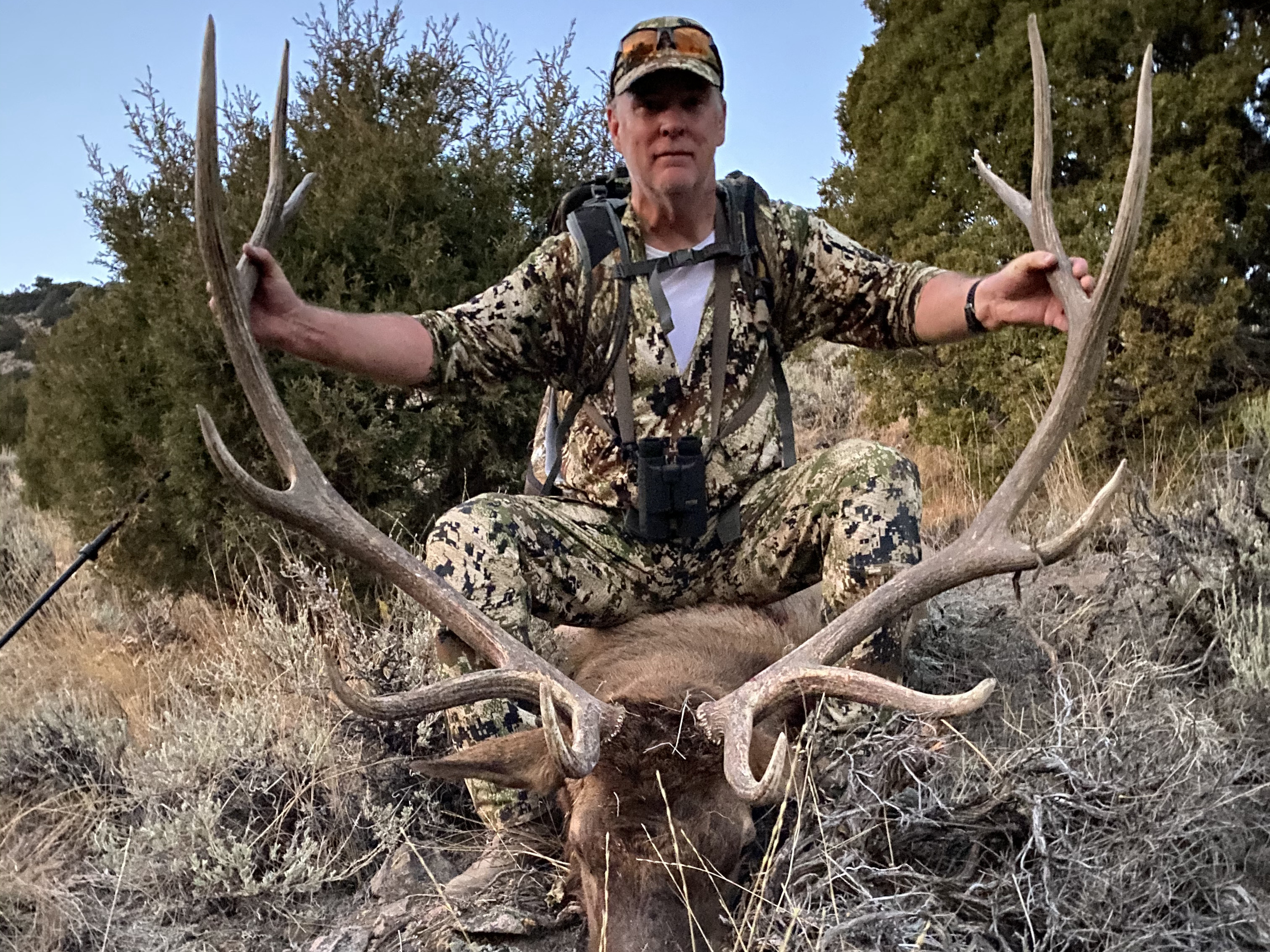 In early-October 2020, Wood River Valley resident Kevin Cahill sat atop a ridge  near Mackay trying to settle his heart rate and control his breathing so he could take steady aim at a big herd bull.

It was a few hundred yards away and dawdling with its harem on a steep hillside. It was farther away than he would have preferred, but it was the best opportunity he’d had in four days of hunting to harvest a mature bull.

His guide instructed him to wait for the bull elk to break away from the rest of the herd. Cahill finally got his chance, and the guide told him to take the shot when he was comfortable.

Cahill pulled the trigger, but hit the dirt at the feet of the big bull. The herd began stirring, but the bull remained within range. Cahill adjusted, aiming a little higher, and pulled the trigger again. He had the elevation right this time, but the shot went wide, again striking dirt hillside.

“My guide told me that we needed to make this shot count,” Cahill recalled. “And on the next shot, I hit him.”

Harvesting a bull elk is an accomplishment for anyone, but Cahill harvesting this elk was unique for a couple of reasons. This was the first big game animal Cahill had ever harvested because the 61-year-old had only started hunting two years earlier.

Second, Cahill’s odds of finding a prized bull greatly improved after he drew one of only eight Super Hunt elk tags in the first drawing of 2020.

After receiving the call from Fish and Game and overcoming his initial disbelief, his hunting group — including his mentor, who is a seasoned Idaho big game hunter — were among the first calls he made.

“They were just so excited,” said Cahill. “Oh my God — the guy who’s never even pulled the trigger on a big game animal is the one who gets a Super Hunt tag.”

The members of this group, a mixture of newer and experienced hunters, had helped introduce Cahill to hunting, and he valued their opinions. Looking at the overwhelming number of options available for his Super Hunt, Cahill was looking for advice on where to start. His hunting buddies agreed — Cahill should hire a guide.

They likely wouldn’t be able to put in the time necessary to help Cahill be successful, they reasoned, and this was a great opportunity for him to harvest a mature bull elk.

“At that point, I got a couple of names from (my mentor), and I realized that the problem is at that point, you’re so far into the year, a lot of these guys are already booked up,” Cahill said. “I wanted to lock something in right away, and not miss out on a chance, because I do not do archery, I don’t do muzzleloader. I’m so brand new at this.”

Cahill had a good idea of what he was looking for. While the chance to harvest a big bull was a consideration, it wasn’t at the top of his priority list. Wherever he hunted, being able to get all of the meat out was of “paramount importance.”

“That would have really bothered me,” Cahill said. “That something that the mentors that I have been working with have really stressed. That’s kind of filtered through to me. So, I ruled out some of the (hunts) where the outfitters said, ‘I can get you a trophy, but I don’t know — unless the weather is cold enough — whether we can get all the meat out in time.’”

Cahill found an outfitter in the Mackay area who checked all of the boxes. After visiting their hunting lodge in the summer to check things out, he booked a five-day trip that aligned with the controlled hunt season opener in Units 36A and 50.

“Because I could cross over units, I had a lot of options,” Cahill said.

Four days into his five day hunt, Cahill harvested his bull. He and the guides were able to pack the meat out without spoilage. He got to see some beautiful new country, and was no longer the guy in the hunting group who had never harvested a big game animal. But, as Cahill explained, his Super Hunt experience went well beyond the hunt itself.

He got to bring a buddy along who was also new to big game hunting, and the two used the opportunity to pepper the hunting guide with questions about how to be better as a hunter.

Cahill took horseback riding lessons, because the guide said he might need to be able to ride. He spent the lead-up to his hunt getting himself into better elk hunting shape (and found out that nothing can quite prepare you for the real thing).

Cahill’s Super Hunt may be a once-in-a-lifetime experience, but that again depends on his luck because he can apply again this year if he wants because there’s not waiting period for successful Super Hunt winners.

“Life is an aggregate of experiences, and this is one that I will never forget,” Cahill said. “It was a special moment in my life.”