Upland bird hunting seasons start in a big way across much of Idaho with Saturday, September 17 marking the opening day for chukar, quail, gray partridge and sage grouse. 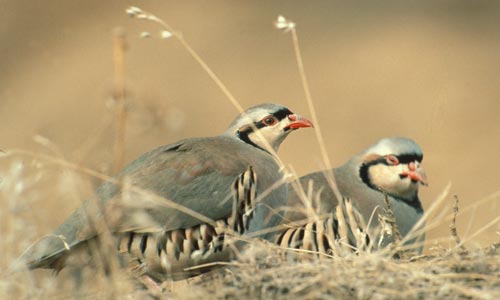 Hunters can expect to find above average to average numbers of birds in most of the state.  A season forecast with breakdowns by species for each of Idaho’s seven regions is available on Fish and Game's website at https://idfg.idaho.gov/press/2016-upland-bird-forecast.

Chukar were introduced into Idaho from Asia. They are common in suitable habitat along the Salmon, Snake and Boise rivers, and along other river drainages of southern and central Idaho up to an elevation of about 5,000 feet.  Chukar habitat consists of steep, rocky canyons with grassy and brushy vegetation.

Gray partridge, also introduced in Idaho, are widely distributed and can be found in agricultural regions, as well as in sagebrush-grassland areas. They are hardy birds able to withstand severe winter weather if adequate food is available.

Bobwhite and California quail seasons in Area 1 in north and western Idaho run through January 31. The daily bag limit is 10 total, and the possession limit is 30 total. Area 2 in east-central and eastern Idaho is closed.

Hunters are reminded that there are no hunting seasons for Gambel’s quail and mountain quail. The Gambel’s quail was introduced near Salmon in 1917, and a small population still exists there. The native mountain quail was once common in the western part of Idaho.  It now exists only in small, scattered populations in dense mountain brush fields usually associated with riparian areas.  It is rare in the mountains from Boise to Bennett Mountain, the Owyhee Mountains, and along the Little Salmon River, main Salmon and lower Snake River.

The seven-day sage grouse season runs from Saturday, September 17 through Friday, September 23, with a one-bird daily limit and a two-bird possession limit.

The season will open in the same areas as last year's hunt with the exception of re-opening an area in Elmore County east and south of U.S. Highway 20 and north of Interstate 84 from Exit 95 east to the county line.

The 2016 Sage grouse Seasons and Rules brochure, including a map of areas open to sage-grouse hunting, is available at Fish and Game license vendors and online at https://idfg.idaho.gov/hunt/rules/upland-furbearer-turkey.

Current sage grouse lek data indicate that many populations are stable to increasing. Fish and Game closely monitors sage grouse annually to ensure hunting will not compromise the population. Fish and Game follows guidelines that allow the flexibility to also close areas to hunting due to low population numbers, insufficient data, or impacts of wildfire and West Nile virus.

This native grouse is widely distributed in areas with large blocks of sagebrush habitat throughout southern Idaho. Sagebrush is a crucial winter food for sage grouse and also provides them with nesting and roosting cover during the rest of the year. Wet places, including agricultural lands, are important feeding areas for hens with chicks and are heavily used by sage grouse during the fall in dry years.

Wings collected from harvested birds provide important biological information used to better manage their populations.  Hunters who see a wing barrel are asked to deposit one wing from each bird they harvest. Fish and Game also collects wings at check stations and through a mail-in wing survey. Anyone who would like to participate in the wing envelope program is asked to call 208-334-2920.