The Idaho Fish and Game Commission directed Fish and Game staff to develop a proposed bill for consideration by the Idaho Legislature that would create a new $5 charge to purchase an Adult Resident annual hunting, fishing or trapping license.

Revenue from the proposed fee would be used for three purposes:

The proposed fee would generate an estimated $2 million annually.  Here’s how the funds would be utilized:

Fish and Game’s depredation compensation law has been in effect for nearly 30 years.

Fish and Game’s depredation compensation law has been in effect for nearly 30 years. The new fee not only improves Fish and Game’s ability to compensate for, and prevent damages, it also helps the agency provide more and better hunting and fishing opportunity across the state.

The Fish and Game Commission recognizes that managing for abundant big game herds comes with responsibility to address impacts those herds cause to privately owned farms and ranches.

The proposed new fee would be paid prior to purchasing an annual license and does not change Fish and Game’s Price Lock Revenue proposal currently under consideration.  More information about Price Lock is posted on the Fish and Game website: https://idfg.idaho.gov/pricelock 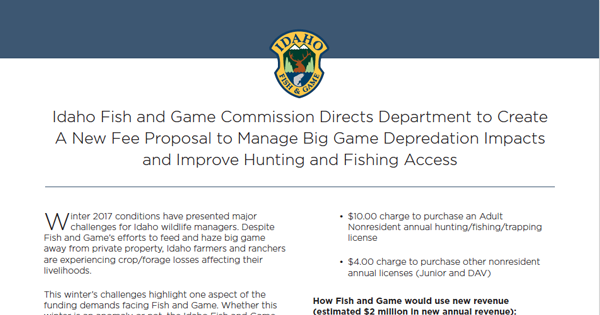 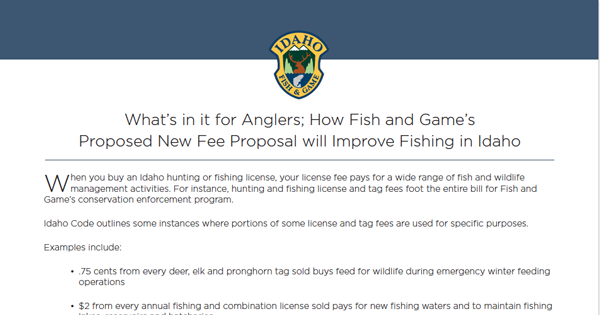 What’s in it for Anglers; How Fish and Game’s Proposed New Fee Proposal will Improve Fishing in Idaho

A summary handout describing how this proposal will benefit Idaho anglers