Being a fisheries biologist certainly can have its perks. We may not make the most money, but sometimes we get paid to do things that others would pay a lot of money to do. Jet boating Hells Canyon and fishing for sturgeon is one of those things. 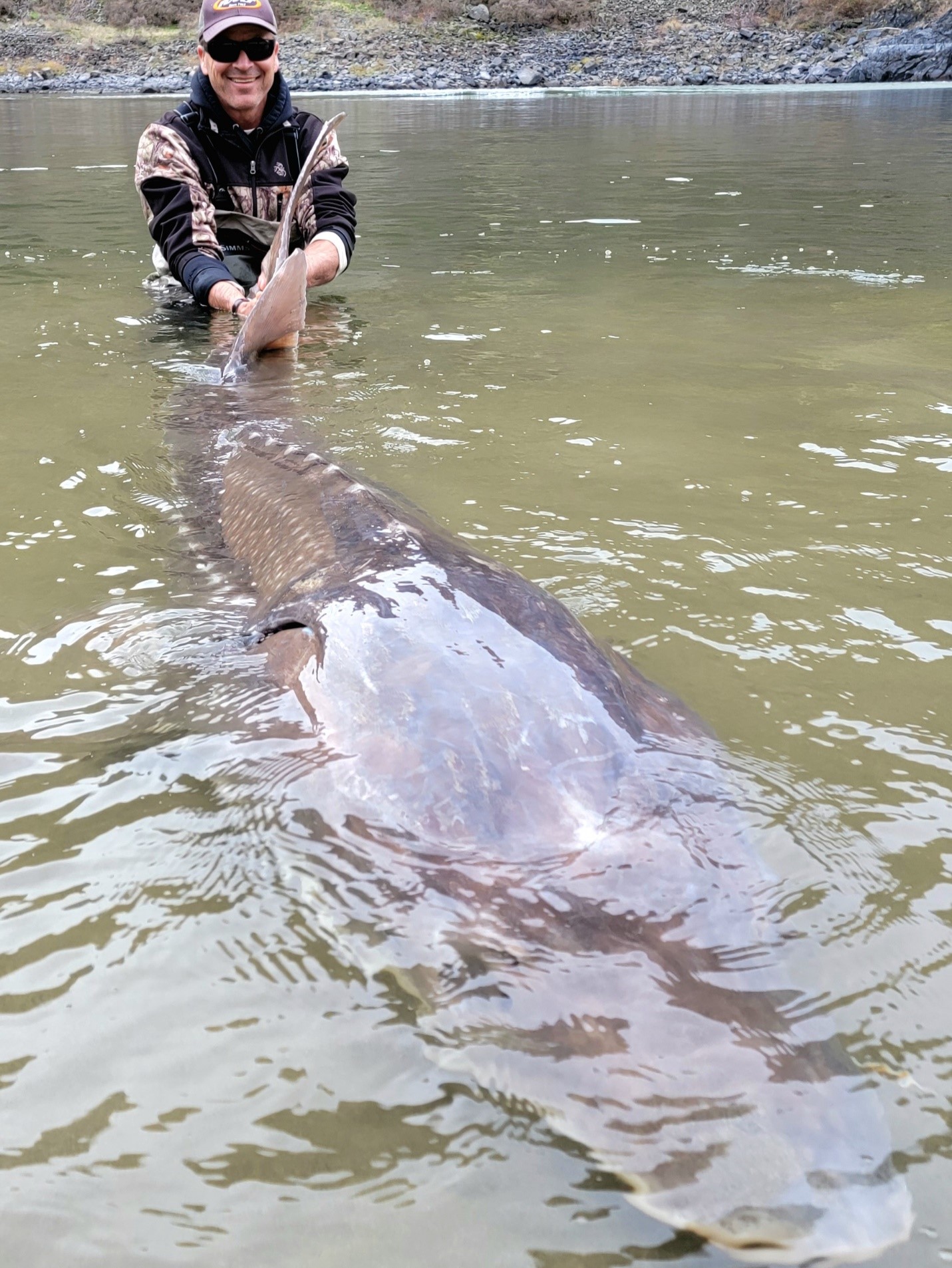 Although it may look like we are just having fun when were are out doing this, this research actually helps us learn important things about the Snake River's white sturgeon population. Every year we spend time fishing Hells Canyon for sturgeon so that we can measure, tag, scan for previous tags, and evaluate the condition of sturgeon we catch. This work helps us better understand growth, movement, and mortality of these unique fish, and it helps highlight areas of concern where we may want to do more focused research in the future (follow this link for an example sturgeon research). 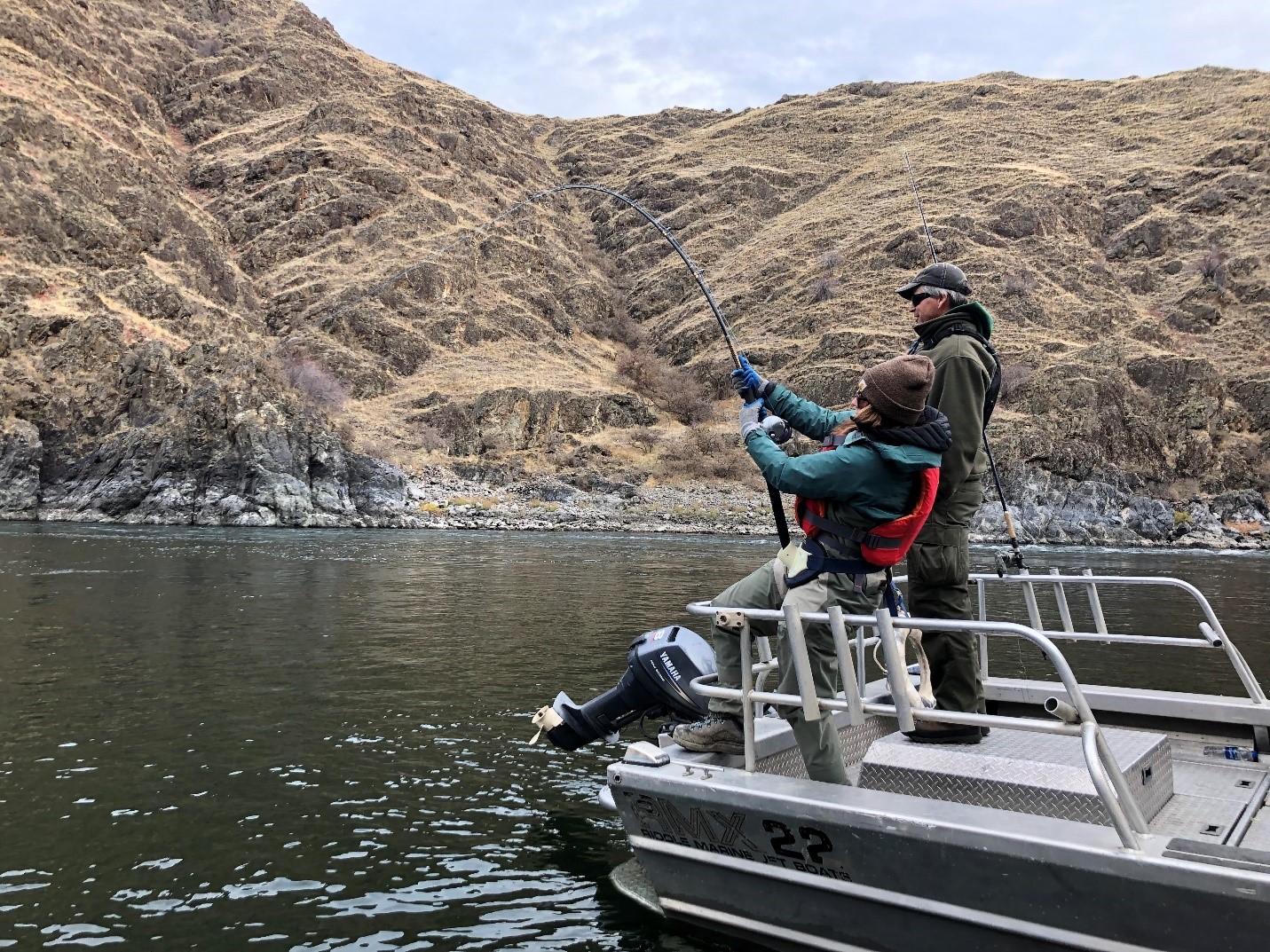 One of the common questions we get is, “just how big do these fish get?” To date, the biggest sturgeon we have sampled between Lower Granite Dam and Hells Canyon Dam was 10 feet 8 inches long and bottomed out a 500-pound scale. We (Fish and Game, Idaho Power, and Nez Perce Tribe) have been capturing (through rod and reel and set lines) and tagging sturgeon in Hells Canyon for over 30 years.

During this time, we have handled over 4,000 fish, and fewer than 10 of those exceeded 10 feet in length. In addition, Idaho’s current catch-and-release record sturgeon is a fish caught from Hells Canyon that was 119.5-inches long (a half-inch short of 10 feet). So, to say the least, catching a 10-foot sturgeon is rare.

A group of us were out sampling sturgeon this fall, and what we experienced was so amazing that I just had to share it with you. Now remember, 10-foot sturgeon are rare in Hells Canyon, and in fact, we hadn’t caught one for over five years – that was, until this amazing week.

We were having difficulty hooking fish this particular day as the fish were biting very lightly, and if you didn’t get to the rod quickly, you missed your opportunity. So, we adjusted our strategy by staying focused on our rods, and when the rod moved we did not wait to set the hook. This strategy paid dividends, as not too much later, we hooked into a brute. When it launched itself into the air, we all gasped at its size. An hour and 15 minutes later, we boated this monster that measured 10-feet, 1-inch long. Not only was this fish long, it was also fat. It taped 50 inches around its belly! Check it out yourself in the picture below. We had never caught and tagged this fish before which was surprising seeing it has been around a long time. 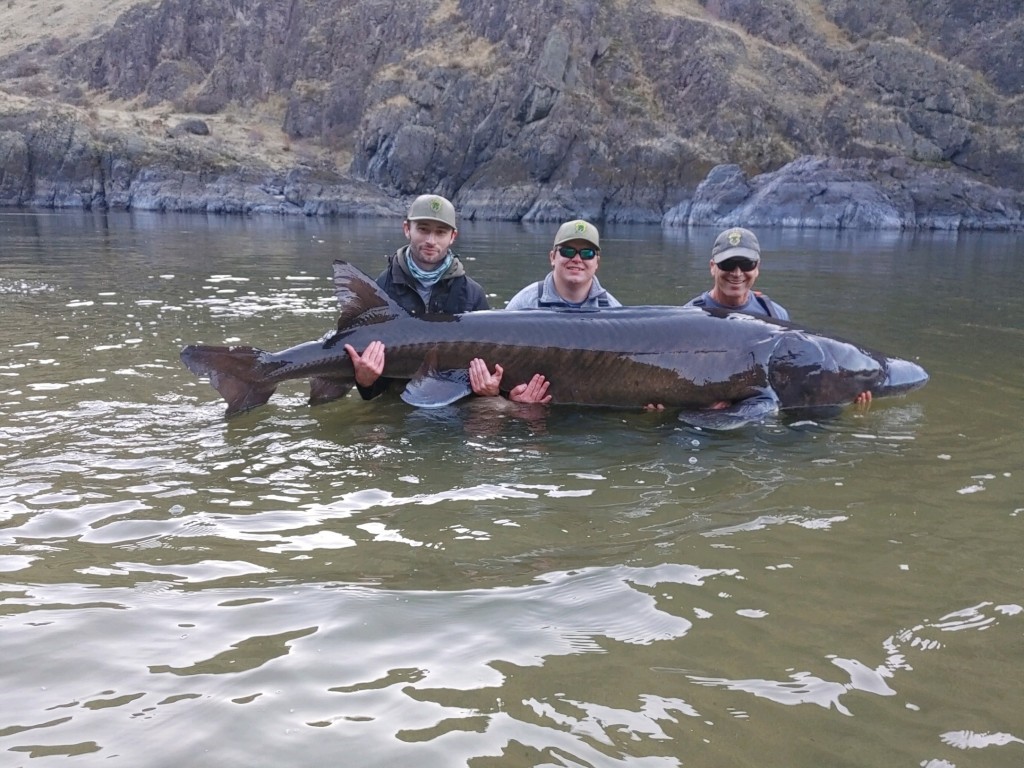 After working up this fish, we boated downriver to catch up to the other sampling boat to meet up for lunch (we were late) and brag a little. When we found them, they were hooked up into a large sturgeon of their own.

Over time, it became evident that it was huge, and an hour and a half after hooking this fish, they landed it just as the light was starting to wane. When we put a tape to it, it measured 10-feet, 4-inches in length. The picture below doesn’t do it justices as it was incredibly fat – 54-inches around! We didn’t have a scale with us, but this fish was probably pushing 500 pounds. It was also a fish that we had never caught and tagged before. 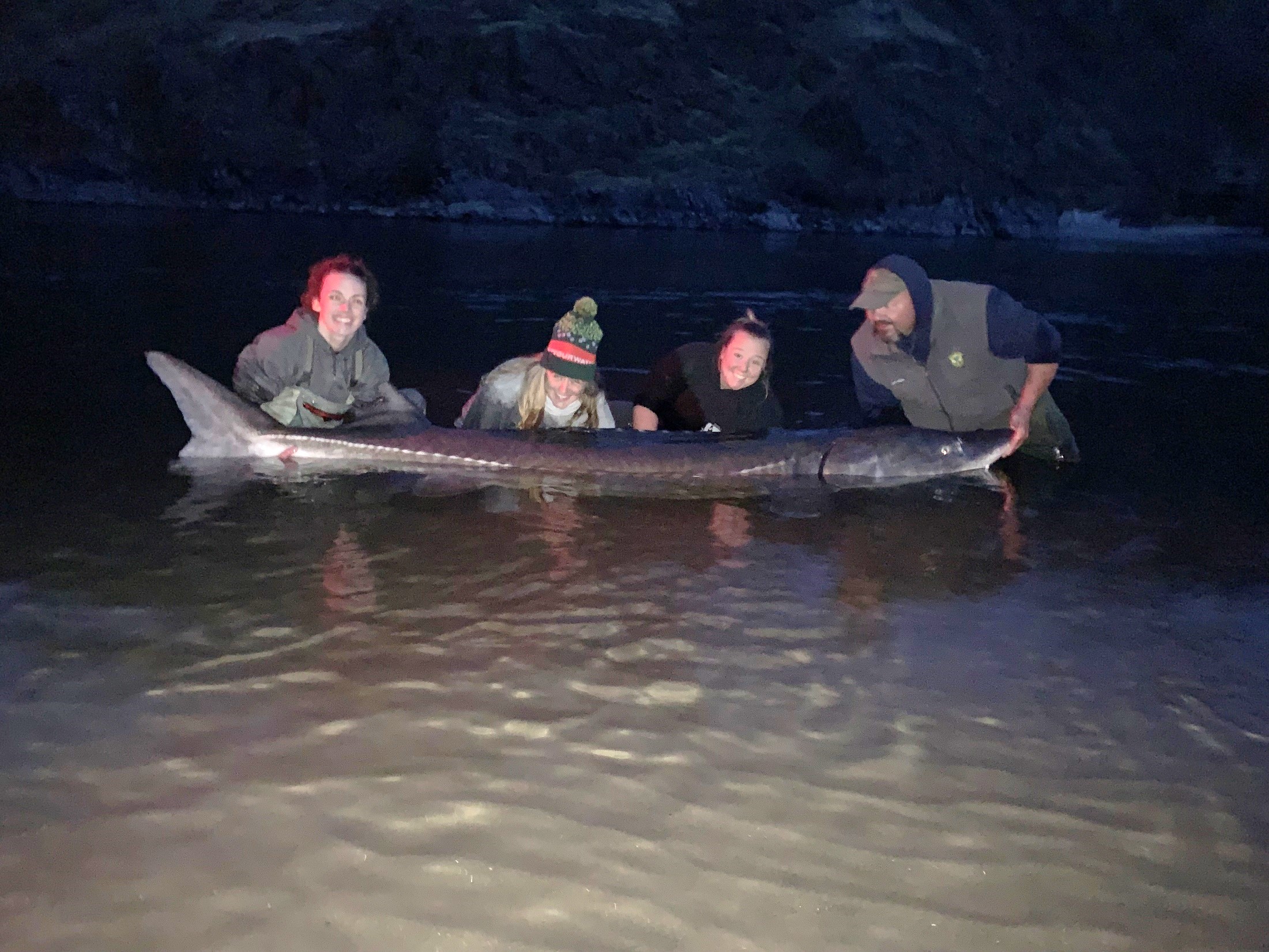 And it didn’t stop with the second monster from the depths. Over the rest of the week, we landed another 10 footer twice! The second time we caught it, it was a half-mile farther upriver. This was the sixth and seventh time we have landed this particular sturgeon. The first time it was caught was in 2010 and it measured 9-feet, 10-inches. Eleven years later, it now measures 10-feet, 4-inches. It was not as fat as the other two, but massive none the less. Judge for yourself. I have seen times when the big fish turn on and all you catch are fish over 8 feet long, but never have I seen anything like this amazing week. 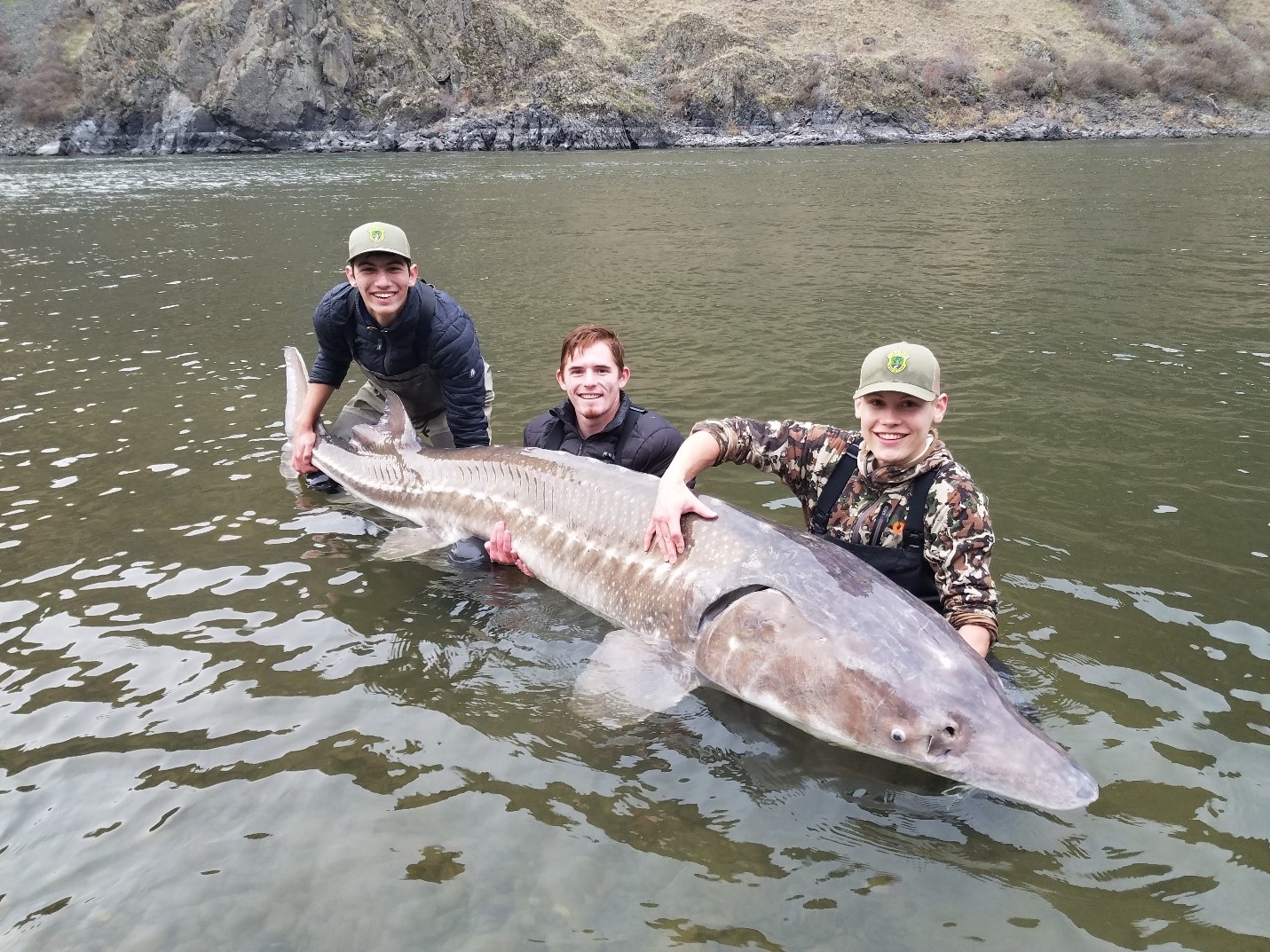 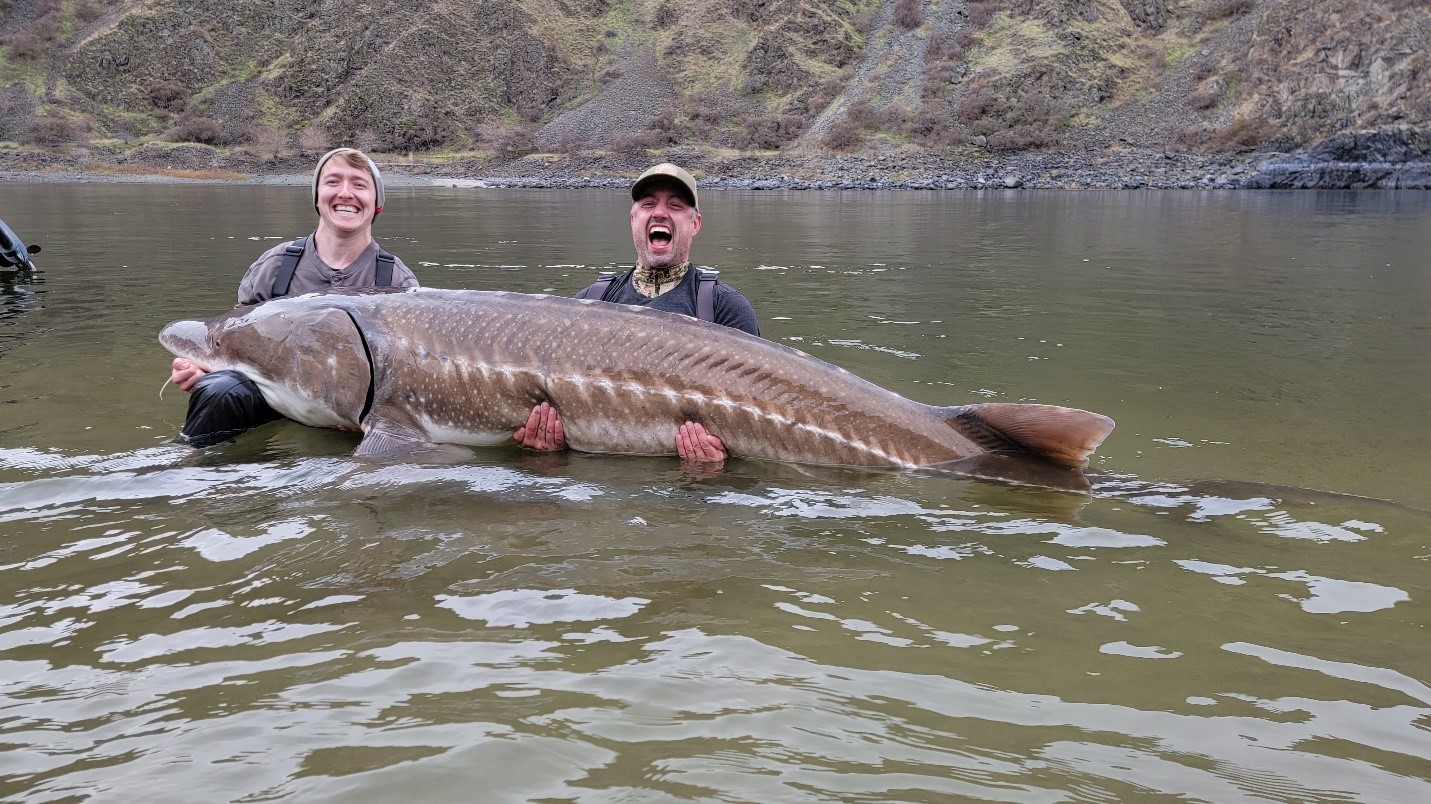 If you are wondering how old those fish are, it is hard to tell because these fish are old enough that they likely lived part of their lives when there were few dams and the salmon runs were larger (they like to eat salmon and their eggs). However, based on the growth rates we see now, their age is largely dependent on whether they lived in Lower Granite Reservoir for part of their life or not. If they lived in the reservoir, they are likely around 70-90 years old (they grow much faster there), whereas if they lived in the river their entire life, they would be over 100 years old!

Here are some tips if you want to go after big sturgeon. First, if you want to catch big fish, use heavy line. We like to use 60-pound test mono for the main line with 80-pound test leaders. Although you can fish with heavy braid (150-pound plus), I don’t like to use it because when it wraps around fish it can cut into them.

Next, if you hook a big fish, it is important that you follow it closely with the boat. It is almost impossible to land a 10 footer from shore. You will often have to fight fish of this size for over an hour, and if you don’t keep the boat above it to keep the line off the bottom, the repeated wear on the line as the fish hugs the bottom will eventually cause you to break it off. Even when we do follow the fish around with the boat, after landing a big one, the line usually has significant abrasion on it.

I also like to use big hooks. I prefer to use 12/0 circle hooks or “J” hooks 10/0 or larger. I have found that with smaller hooks you often don’t get a good bite into their lip, which will make it more likely that it will eventually pull out. Finally, you need luck in your favor. I suspect we have lost many more 10 footers than we have landed.