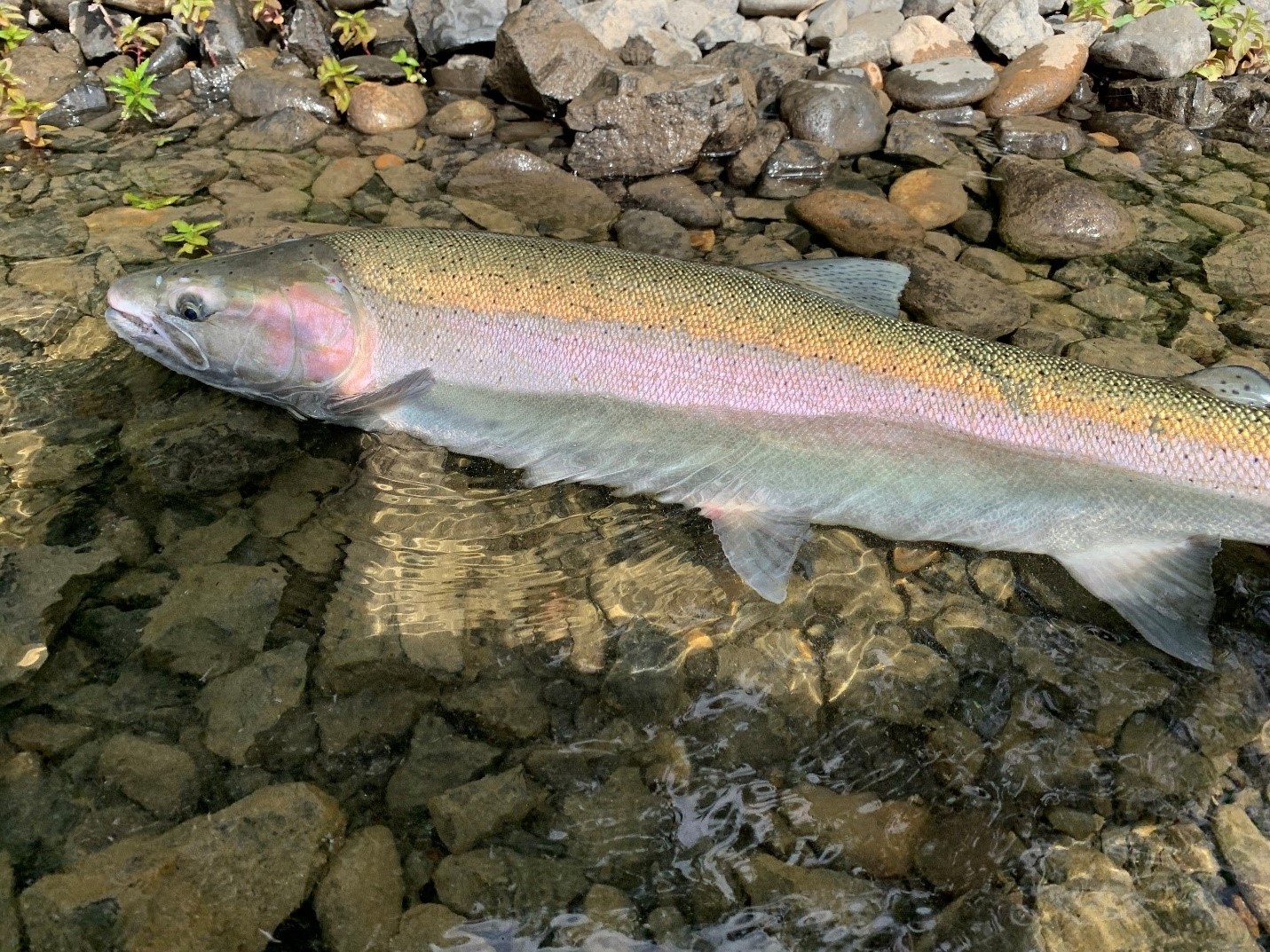 By this time, typically more than 75% of the hatchery steelhead run destined for Idaho’s Salmon and Snake rivers have passed over Bonneville Dam, which means we now have a good idea of what these returns will ultimately be like. For those of you who are interested in the Clearwater River run, we are less certain on what this run will look like as typically by this time only 10% of the run has passed Bonneville Dam. However, if you read below, I have provided some information on how the Clearwater run is currently looking.

When we evaluate Idaho’s hatchery returns to the Salmon and Snake rivers, we like to look closely at how many fish are returning to the Sawtooth, Pahsimeroi, and Hells Canyon hatchery traps. These traps are where all the broodstock are collected to fill our hatcheries and prodcue smolts to be released throughout the Salmon and Snake rivers in the future. When steelhead returns to these locations are low, it may be necessary to implement more restrictive seasons or limits to ensure we make broodstock goals. The figure below summarizes the number (based on PIT tag detections) of steelhead destined for these traps that have passed over Bonneville Dam since 2010.  The red portion of each bar shows how many of the returning fish spent one year in the ocean and the yellow portion shows how many spent two or three years in the ocean before returning as an adult. The bars presented for 2021 show how many steelhead we project will pass over Bonneville Dam this year. You will notice that if this year’s current prediction is accurate (about 9,000 fish), the returns to these hatchery traps will be the lowest we have seen since we started using PIT tags. 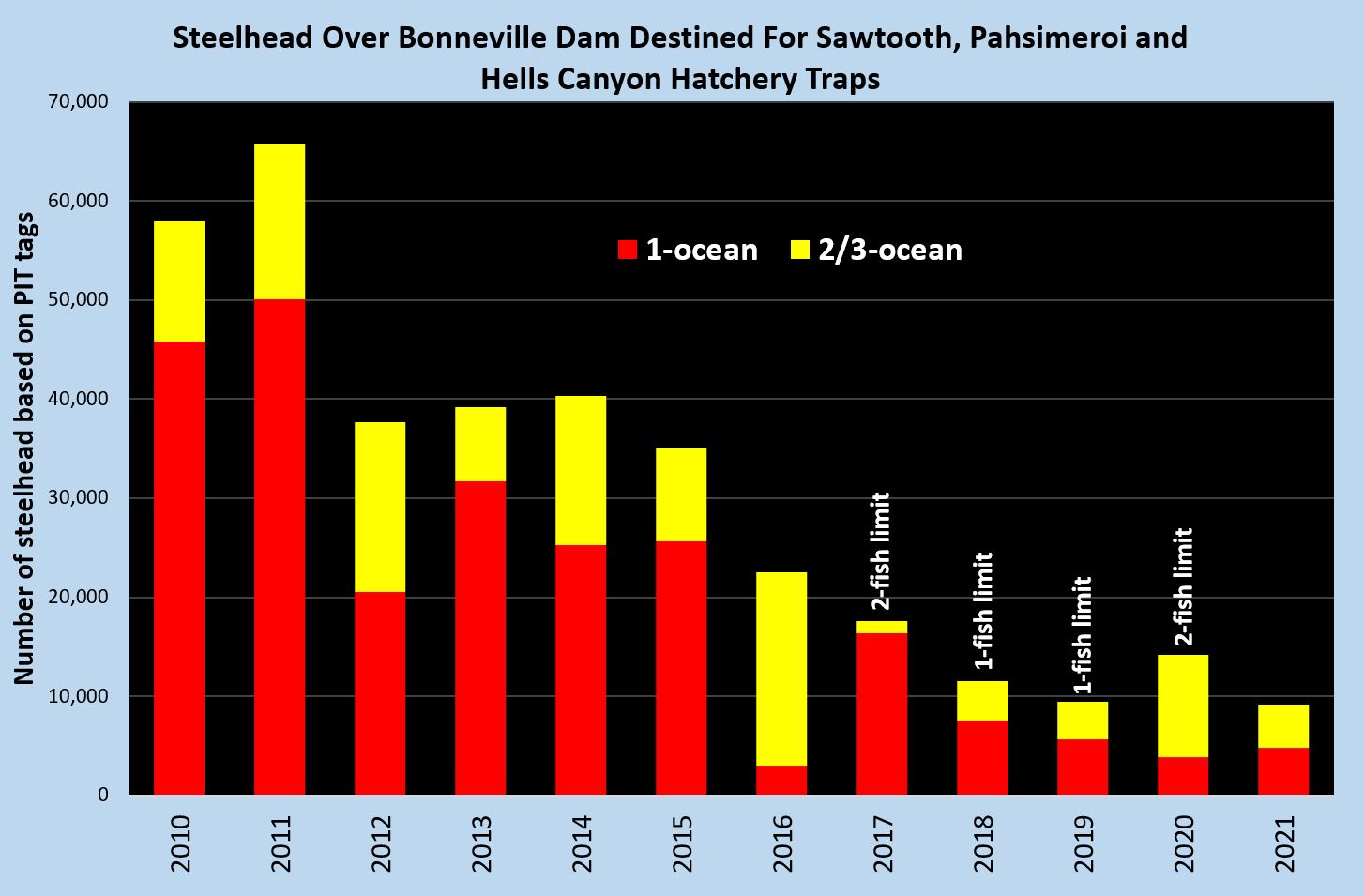 In Idaho, we typically open the steelhead harvest season in the Snake and Salmon rivers on September 1 and allow a daily harvest of three fish. As you can see from the graph above, the previous four years (2017-2020) we implemented more restrictive limits (1 or 2-fish daily limits). In all four years that we implemented more restrictive limits, we were successful in meeting out broodstock goals. With this year’s projected return being lower than anything we have seen, we needed to evaluate this data further. So, we looked at what percent of the fish that pass over Lower Granite Dam made it to one of the trap locations when we provided a 1-fish daily limit (2018 and 2019 run years). What we found is that about 20% of fish that made it past Lower Granite Dam made it to one of these hatchery traps (we call this a conversion rate). By applying this 20% conversion rate to the number of these steelhead that we believe will ultimately make it past Lower Granite Dam this year (and next spring), our calculations showed that enough steelhead will make it to these traps to meet broodstock needs. This is good news as it tells us there are enough hatchery fish to provide some harvest opportunities.

Another thing we pay close attention to is the status of our wild steelhead returns. If you look at the graph below, you will see we are projecting that around 9,300 wild steelhead will pass over Lower Granite Dam during the 2021-2022 run. This certainly is a low return; however, it is above the Critical Abundance Threshold (> 6,300 fish past Ice Harbor Dam – first Snake River dam) where NOAA Fisheries has indicated that if the wild run drops below this number, addition conservation measures are required to minimize risk to wild steelhead. As you all know, our sport fisheries do not allow harvest of wild steelhead, thus impacts from Idaho fisheries will occur only through catch-and-release practices. Modeling exercises we have conducted indicate that the low mortality Idaho’s wild steelhead face through our fisheries will not reduce their long-term probability of persistence. 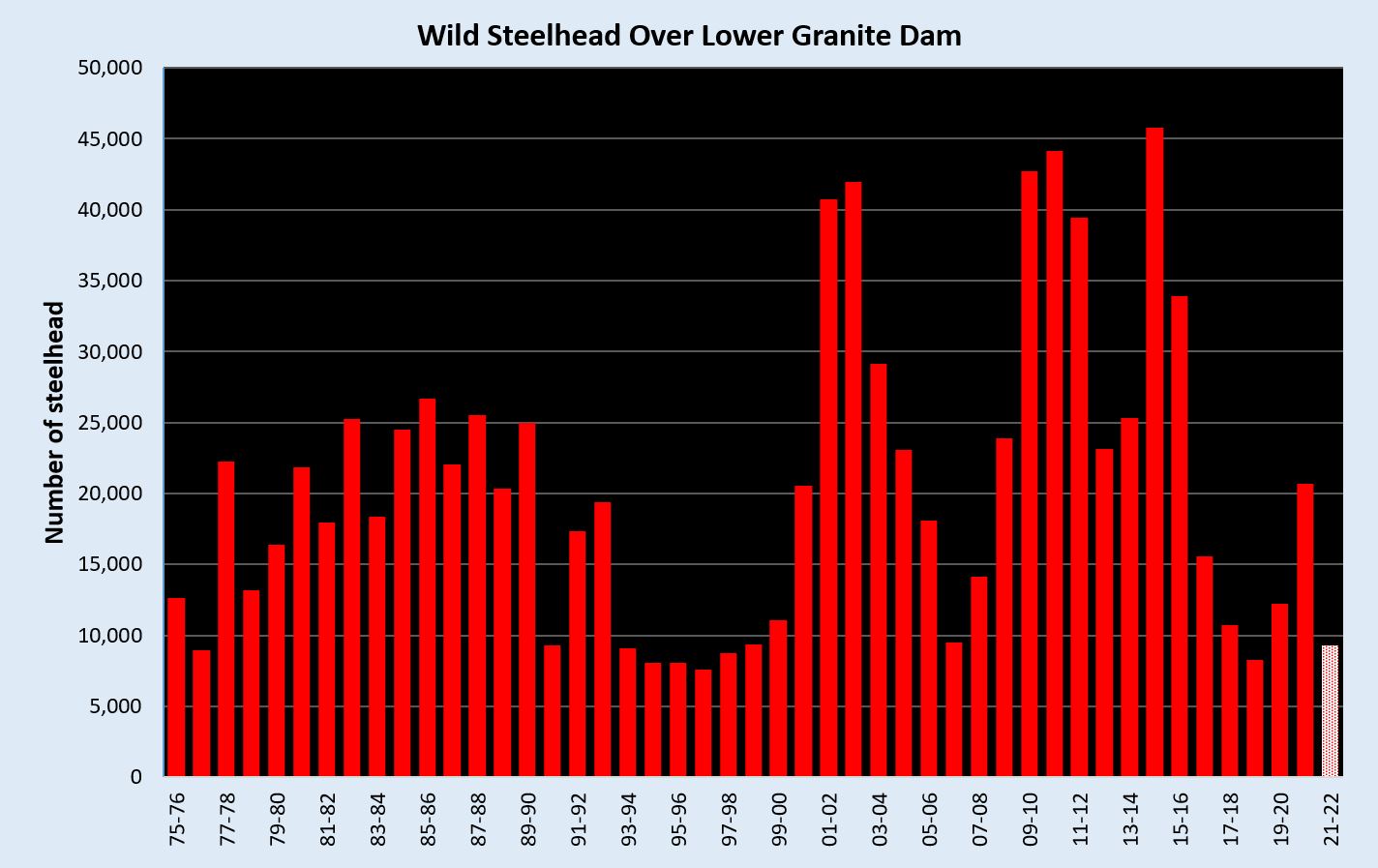 Based on this information, IDFG fisheries managers developed a proposal to reduce the daily limit to one (1) fish in the Snake River, Salmon River, Little Salmon River, and Clearwater River below Memorial Bridge for our Commission to consider. The Commission met today (September 1, 2021) and agreed with our assessment of these fisheries and approved our proposal to reduce the daily limit of steelhead to one fish in these rivers starting September 3. For more details on the steelhead season and limits, please refer to the IDFG steelhead seasons and rules webpage (https://idfg.idaho.gov/fish/steelhead/rules).

The Commission made no efforts to adjust the steelhead season and limits in the Clearwater River and its tributaries (except downstream of Memorial Bridge) because, at this point, there is too much uncertainty with how this return will end up. As I indicated earlier, we won’t have a good feel for this return until around mid to late September when 50-75% of the run will have passed over Bonneville Dam. That being said, I developed the graph below to share with you how this run is looking with the understanding that there is still a lot of uncertainty. If you look at the solid red line in the figure below, it shows how many hatchery bound steelhead have passed over Bonneville Dam as of Aug 30, 2021 (about 2,100 based on PIT tags). The dashed red line is what we are predicting and assumes the run timing is average. If this prediction is accurate, that would mean about 21,000 Clearwater bound hatchery fish would pass over Bonneville Dam this year which is just about the same number as we saw last year. This is a lot more than we thought would return this year based on our preseason forecast. Let’s hope this prediction holds true. Because the steelhead harvest season in the majority of the Clearwater basin does not start until October 15, we can wait until closer to that date before deciding what seasons and limits are appropriate to ensure we meet broodstock needs. So, stay tuned for that. 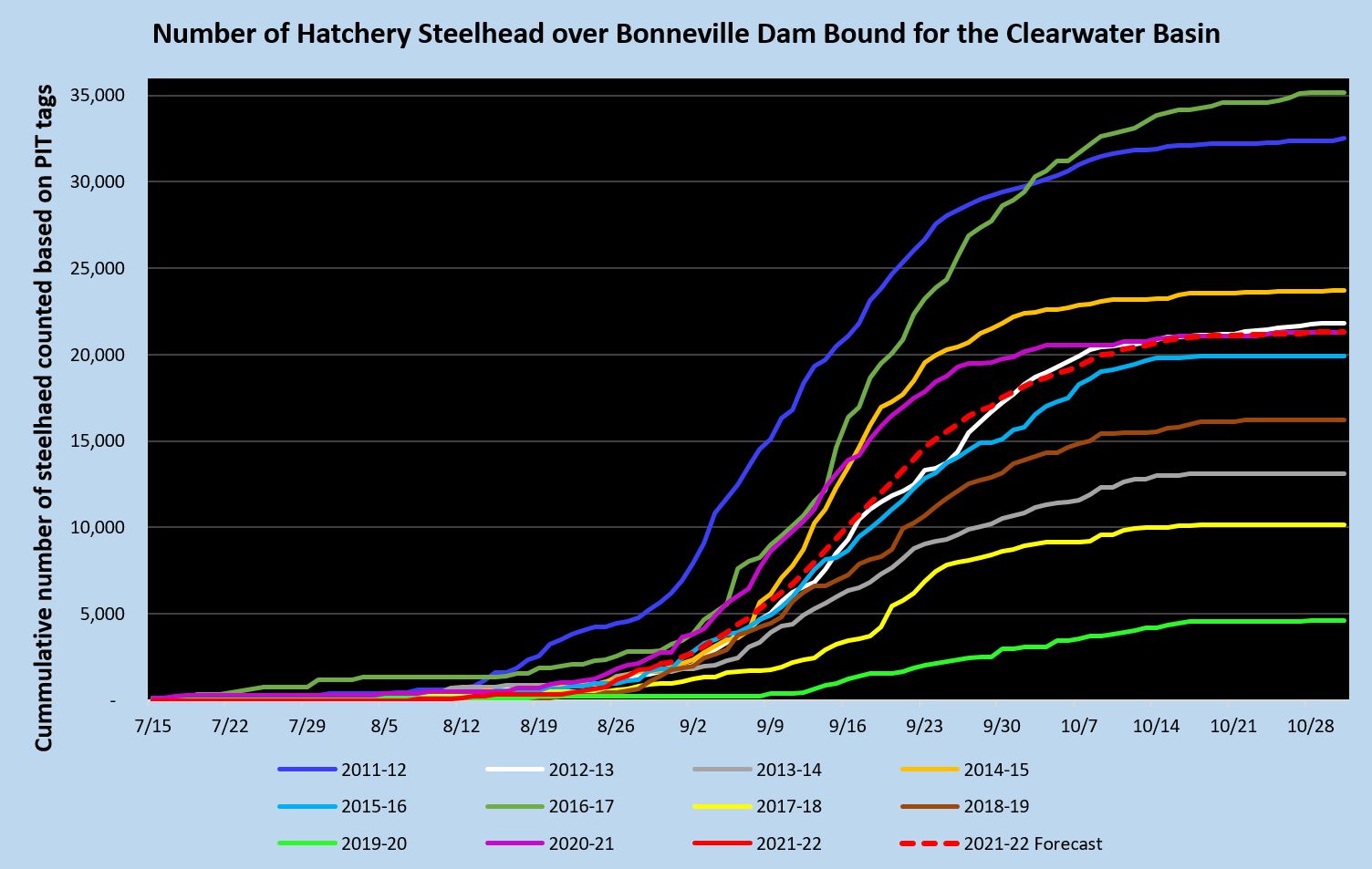 You should also be aware that the Commission approved a Coho Salmon season on the Snake River that starts on September 3. That means there will be a Coho Salmon season in both the Snake and Clearwater rivers this year for the first time in over 100 years. We are able to provide these opportunities because we are expecting a record setting number of Coho Salmon to pass over Lower Granite Dam this year. For more details on the Coho Salmon season and limits please visit this IDFG web page (https://idfg.idaho.gov/fish/coho/rules).

I also thought I would provide a quick update on the fall Chinook Salmon run.  The fall Chinook Salmon run is really picking up at Bonneville Dam, and although the run is still early, it looks like the return to Idaho could come in greater than the forecasted (better than last year). Trapping of broodstock at Lower Granite Dam has also been going better than expected, and for that reason, the trap rate at Lower Granite Dam will be reduced from 70% to 18% starting tomorrow (Sep 2, 2021).  What that means is the combination of the run picking up at Lower Granite Dam and a reduced trap rate should result in some good fishing in the near future.

Despite the down return of steelhead that are destined for the Snake and Salmon rivers, it looks like this fall will provide a good diversity of fishing opportunities for steelhead, fall Chinook Salmon, and Coho Salmon. Good luck!