By Will Lubenau, University of Idaho

Now that spring steelhead fishing has concluded around the state, we wanted to take a moment and update you on the University of Idaho steelhead tagging study. The information discussed is preliminary and may change as we continue gathering, analyzing, and processing data.

One of the primary reasons for doing this study is to understand how many wild steelhead are caught in Idaho. When a tagged fish is caught, the visible tag is typically removed and reported to Fish and Game. Using the number of tags put out and the number caught and reported by anglers, we can estimate how many wild fish were caught statewide. But, you may be thinking, if most tags are removed when a fish is first caught, how do you know if a fish is caught twice? This could be important to understand since, if a fish is caught twice, it may be less likely to survive. Well, we developed a way to get information on this question. 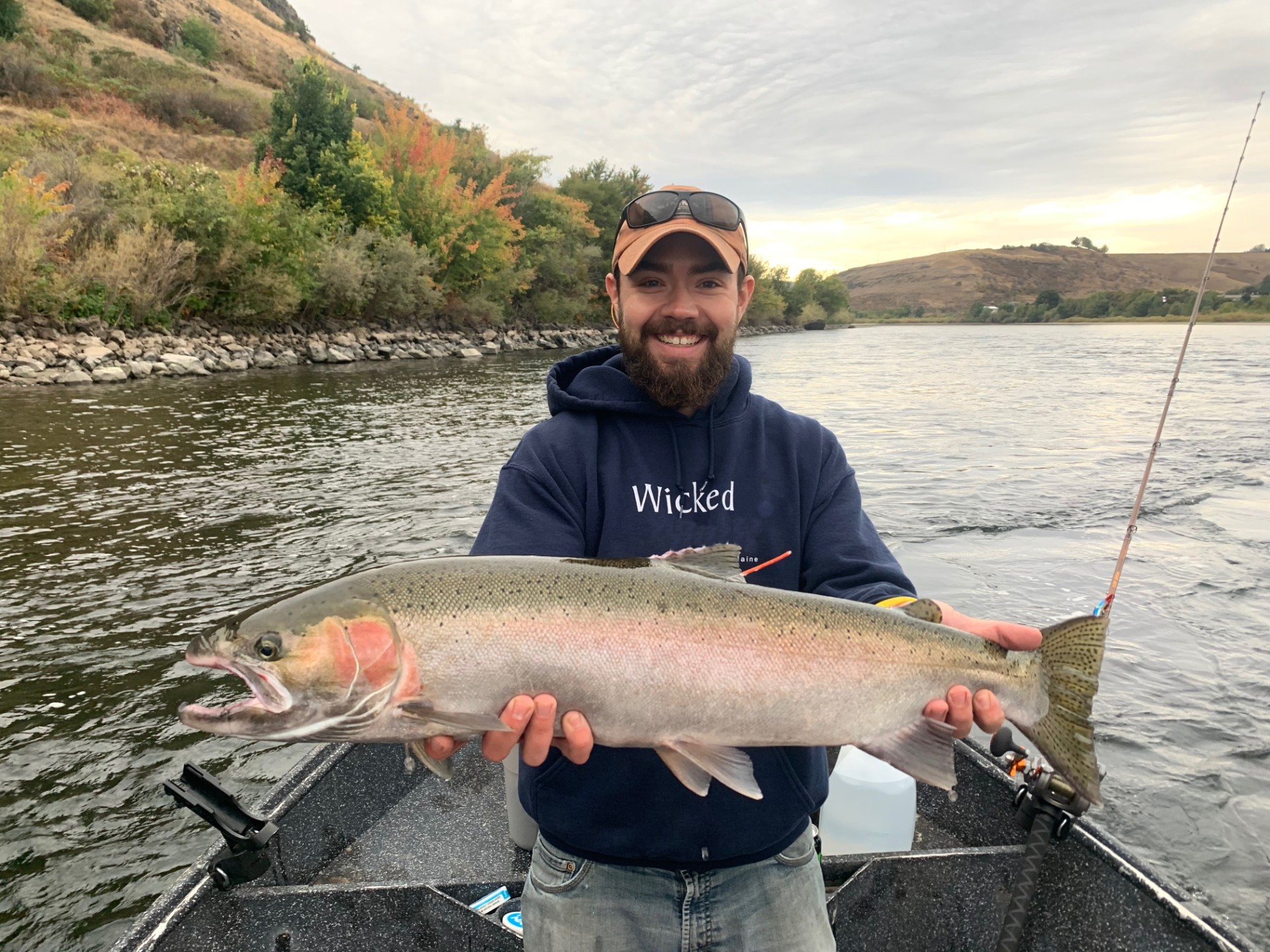 Each study fish is tagged with two tags. One tag is orange and visible to anglers and the second is a PIT tag placed inside the body (for more information on PIT tags click HERE). Both the tags can be used to identify an individual fish. It is like a person having a driver’s-license number and social-security number. The PIT tag provides a way to identify an individual fish after the visible tag is removed.

Fish and Game has used guides for many years to collect samples from steelhead harvested on their trips. For this study we gave a number of guides in Idaho a handheld PIT-tag reader that can detect the tag inside the fish (see picture). This allows guides to quickly detect a tag and release the fish.

When a tag is scanned, the reader provides a number that can be traced back to an individual fish. The guides have done an awesome job scanning the fish they and their clients have caught. Through their effort we have added 150 PIT tagged fish to our catch and release data. In addition, if they caught a study fish that had an external tag, they were asked to report it but not remove it from the fish so that if the fish was caught again the next angler could report the external tag. As a result, there has been a total of 65 study fish that have been caught and released with a tag that were available to be caught a second time. Of the 65 Fish, 18 have been caught and reported a second time. With this information in hand, we have now documented fish with multiple catch and release events and can incorporate that information into the study.

Remember, this study is going to be repeated over the next steelhead run. Conducting the study over a two-year period allows us to incorporate year-to-year changes in our steelhead runs into the study. When you get out in a few months to catch some steelhead, be sure to look for an orange tag near the dorsal fin of all caught fish!

We would like to encourage anyone that needs to report a tag to do so immediately at https://idfg.idaho.gov/fish/tag/add! Reward tags must be returned directly to Fish and Game to claim a reward. A big thank you to all the guides that have helped with this research and to all the steelhead anglers that have reported tags! Look for more updates on this project later this summer as we start in on the second field season.