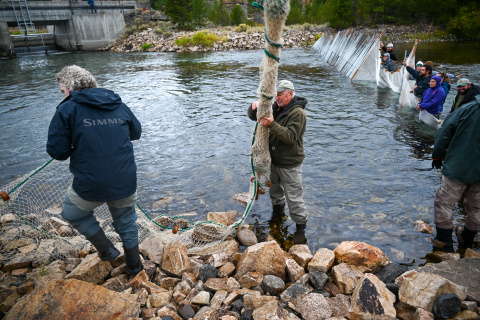 Idaho’s Stanley Basin has long been one of the West’s most iconic roundup arenas. For 160 years, cowboys and their hooved counterparts have comingled out in the vast valley beneath the towering Sawtooth Mountains where they come together each fall to round up the herds.

Idaho Fish and Game has their own outfit of wranglers that flock to the Stanley Basin each fall from all corners of the state. Instead of leather chaps, they wear neoprene wetsuits; instead of Stetsons they don snorkels; long nets instead of lassos; and fish trucks in lieu of chuckwagons.

And the prized stock pulled in at the end of the day? One of the most emblematic fish in the Pacific Northwest: the sockeye salmon.

Each year, a portion of the sockeye population reach the trap at the Sawtooth Hatchery but stop just short of the finish line. Here, some of the returning sockeye were born and return, miraculously, to the same square mile of water after a 900-mile journey from the Pacific Ocean.

Roughly 30 Fish and Game staffers crawled down the embankments, nets in hand, to help another dozen or so staff corral the remaining sockeye holding near fish trap. 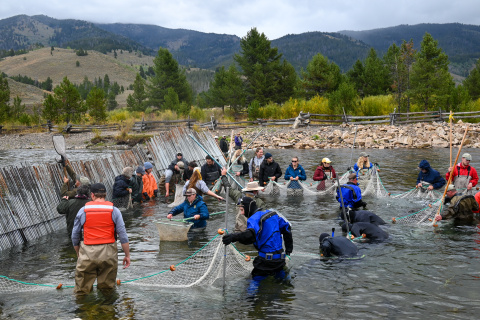 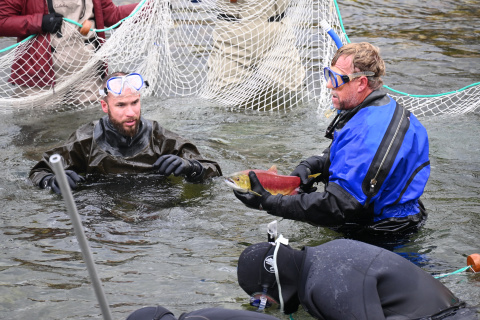 “Later in the run as the water gets low, the sockeye tend to hole up below the trap,” said Fisheries Biologist David Venditti.

Others simply missed the turnoff a few miles back at Redfish Lake Creek, which flows into the aptly named Redfish Lake.

The “hole” at the base of the hatchery’s trap is deep, and this year contained 59 sockeye, a significant number considering only 55 sockeye returned to the Stanley area in 2021.

Every fish is vital because they’re used to replenish hatcheries and also to spawn naturally in several lakes in the Stanley area, and biologists use genetic testing and other factors to determine how those fish will be divided.

But a fish in the river isn’t a fish in hand, which is where the sockeye wranglers come in.

“The good part is we can easily and safely herd them up and load them into the transport vehicles to either be taken back to Redfish or Pettit Lakes to spawn or driven down to our genetics lab in Eagle for some sampling before returning them back to Stanley,” said Venditti.

All hands on deck

It takes a crew of roughly 40 to wrangle up the crimson fish that gave Redfish Lake its name. With nets and chest waders, Fish and Game staff and volunteers carefully wade into the water and encircle the school of sockeye while walking towards a sand bar on the far shore where fish trucks await.

Once the nets have been brought in a circle roughly 30 feet across, it’s the snorkel crew’s time to shine. Eagle Fish Hatchery Assistant Manager Travis Brown and his fisheries outfit stick their faces below the water’s surface and carefully scoop up the sockeye into dip nets. The nets get passed up to the trucks, conveyer belt-style from one hand to the other, quickly and delicately ensuring the salmon aren’t out of the water too long. 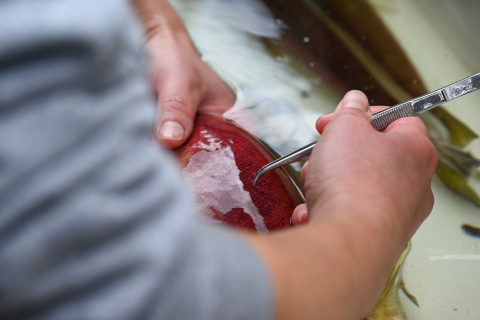 The goal of collecting each and every last sockeye from this pool is simple. More sockeye mean more providers for the next generation. Sockeye managers can determine how the sockeye recovery program is faring and with supplemental testing, can figure out which genetic line the fish came from, like “23 and Me” for salmon.

With this information, fish biologists can determine which genetic lines have the highest survival rates.

It all started with one lonely fish

To appreciate just how far the sockeye have come — not just in terms of miles, either — we need to go back to the year 1992. During that year, just one sockeye salmon, dubbed Lonesome Larry, swam the 900 miles back to the Stanley Basin. Lonesome Larry became a beloved icon and brought the sockeye’s rapidly declining numbers into the public spotlight.

Using biological samples from 16 adult sockeye that returned in the following years, as well as juveniles and residuals captured from Redfish Lake, Fish and Game fisheries biologists were successfully able to jumpstart a sockeye salmon recovery program that continues to this day. 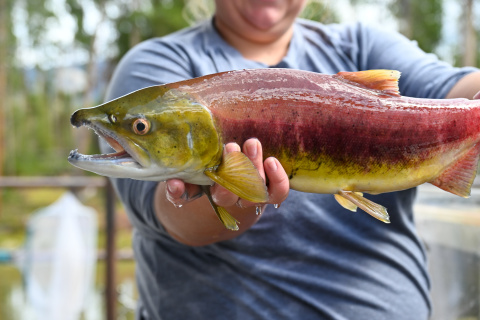 But Fish and Game biologists aren’t doing doughnuts in the infield just yet. In as recent as 2007, only four sockeye salmon returned to the Stanley area, a reminder that poor environmental conditions can quickly turn the tables for sockeye.

The returns vary, though, as shown in 2007, and the ‘boom years’ like 2022, 2016 and 2014 when hundreds returned, allow Fish and Game biologists to account for the bust years when returns are impacted by environmental factors like unseasonably warm water.

The Sockeye Roundup continues to be a proud tradition for Idaho Fish and Game’s fisheries folks and for advocates for the iconic red fish.