Yew in Idaho (White Paper), Idaho Department of Fish and Game, 8 Jan 2019
Yew Species in Idaho and Their Toxicity Risk to Wildlife, Livestock, Pets, and Humans

Yews are very popular in residential and commercial landscapes across Idaho and the US. They are attractive, evergreen shrubs or small trees with bright red, berry-like fruits. They are easy to prune and easy to grow--tolerating shade and a variety of soil types. Many cultivated varieties are available for sale and commonly found in nurseries, garden stores and other plant dealers and distributors. They can be propagated by bare root, container, and cuttings. In Idaho, introduced yews appear to have limited ability to spread through seed production and the seedlings have low vigor. Throughout European and North American history, yews were highly prized for making longbows, and in the 1990s, they were used in synthesis of the cancer drug Taxol. Despite yew’s popularity as an ornamental shrub or tree, they have long been recognized as toxic to livestock and humans.

Four types of yews or their hybrids are commonly found in residential and commercial landscapes across the western US. Japanese yew is the most common type planted in southern Idaho. All four are poisonous: 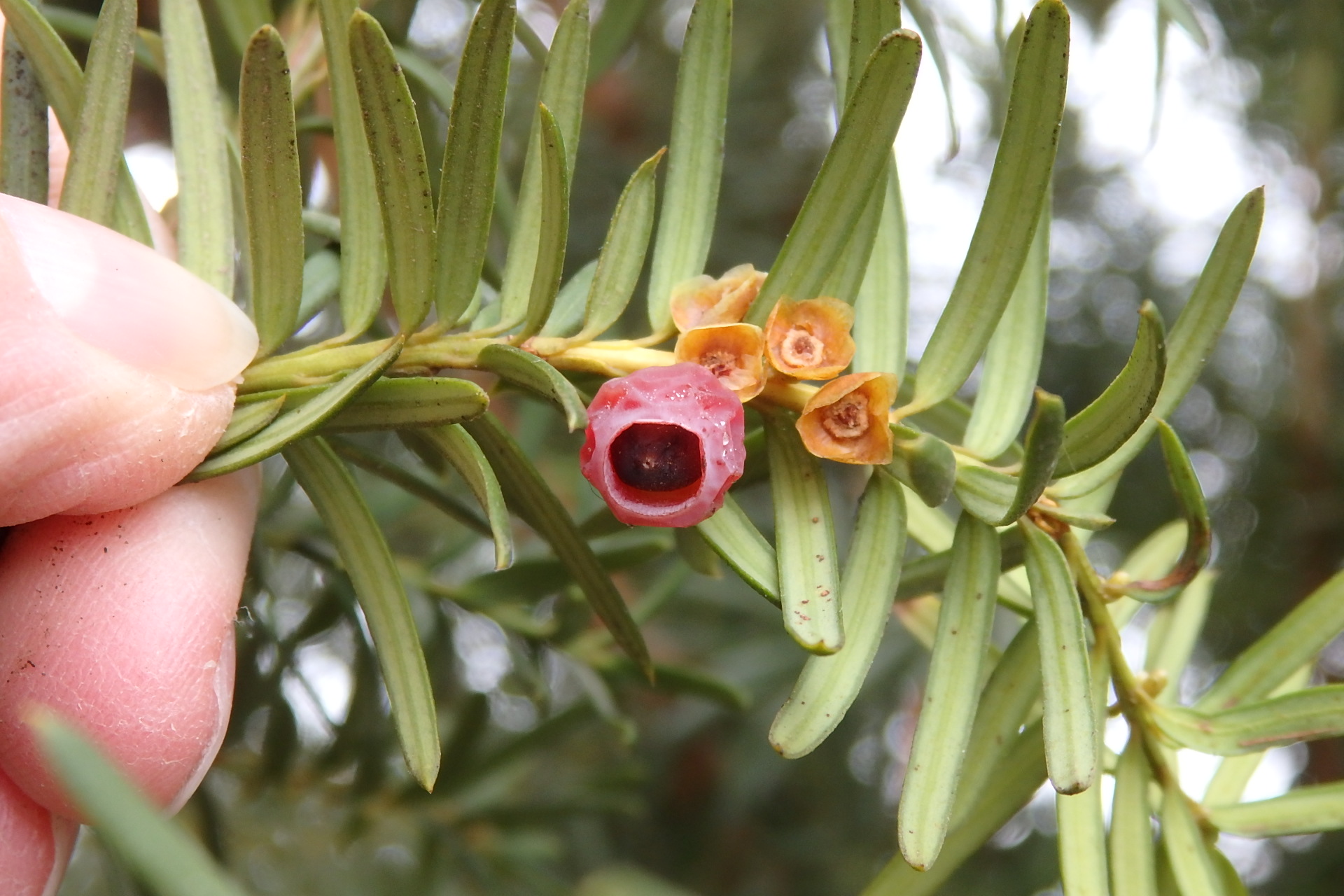 Pacific yew, or western yew (Taxus brevifolia), is found in Idaho from Valley and Washington counties northward. It is a shrub or medium-sized tree reaching 60 ft tall that occurs in wet, shady habitats, and is not typically used in landscaping in southern Idaho--probably because of its high water requirement. Pacific yew contains only trace amounts of toxin and and provides winter forage for moose, elk, and deer. Reports on its toxicity to livestock are mixed.

Yews can be identified by their short, flat evergreen leaves (1‑3 cm long and 2‑3 mm broad arranged spirally on the stem) and bright red, fleshy, pea-sized fruits that have an opening in the bottom that shows a single hard, brown seed inside. The fruit looks like a berry, but is technically a type of cone called an ‘aril’. This aril is distinctive--no other evergreens in Idaho have a berry-like fruit that doesn’t cover the whole seed. However, arils can be hard to find in the winter, when they have dried and fallen off the shrubs, and arils are absent on male shrubs (only female shrubs produce arils).

Most species of yew contain highly poisonous alkaloids known as taxines, with some variation in the exact formula of the alkaloid between the species. The primary alkaloids in yew are Taxine A and B, a group of cardiac glycoside alkaloids that affect sodium and calcium channels in the heart. Taxine B appears to be much more cardiotoxic than Taxine A.

All parts of ornamental yews except the arils contain the toxic alkaloids. The arils are edible and sweet, but the seed is dangerously poisonous.

The yew seeds are eaten by thrushes, waxwings and other birds, which digest the soft fleshy covering of the seed and disperse the hard seeds undamaged in their droppings.

In mammals, the digestive process can break down the leaves or seed coat and release the taxines into the body. This can have fatal results if yew berries are eaten without removing the seeds first.

Grazing animals, particularly cattle and horses, are also sometimes found dead near yew after eating the leaves. Dried branches can be fatal.

Ornamental yews and their related cultivars are toxic to a variety of animals including horses, cattle, dogs, cats, rabbits, birds, deer, elk, and humans.

Ornamental yews are highly toxic with only a small handful of needles needed to kill horses, elk or dogs.

In Idaho, fatal ingestion of Japanese yew has been documented in elk, moose, deer, and pronghorn, especially in winter

In many areas yews are considered the most toxic tree or shrub. In Idaho, Blaine County passed an ordinance to include Japanese yew, English yew, and Chinese yew and their hybrids on the county noxious weed list.

Children are often treated for poisoning after consuming the fruit of yew shrubs. The seeds resist the effects of digestive enzymes so whether or not seeds were chewed affects risk.

Puppies and adult dogs that chew sticks and other plant material are also at risk for poisoning from this plant.

In Idaho, fatal ingestion of Japanese yew or other ornamental yew has been documented in elk, moose, deer, and pronghorn, especially in winter when animals are driven to human habitation by snow depth and yew shrubs are one of the only green plants projecting from the snow. In some locations, winter weather pushes big game animals into urban neighborhoods, increasing the likelihood that yew plants will be encountered.

Reducing the risk of poisoning

To reduce the risk to big game animals homeowners are urged to inventory their property and remove any Japanese or other introduced ornamental yew that might be growing at their residence. These shrubs should be disposed of in a safe, covered landfill. Be aware that dead yews or dry, pruned branches are poisonous. Homeowners can wrap the plants with burlap to prevent access by big game animals until animals have migrated out of the area. Yews resprout from cut stumps, so all large roots need to be dug out unless an herbicide has been used to kill the roots.

Appendix: Alternative shrubs that can be planted instead of yew

These Idaho native evergreens are non-toxic and can tolerate at least some shade:

Several other Idaho native shrubs tolerate at least some shade, but are not evergreen:

These non-native evergreen shrubs tolerate at least some shade: 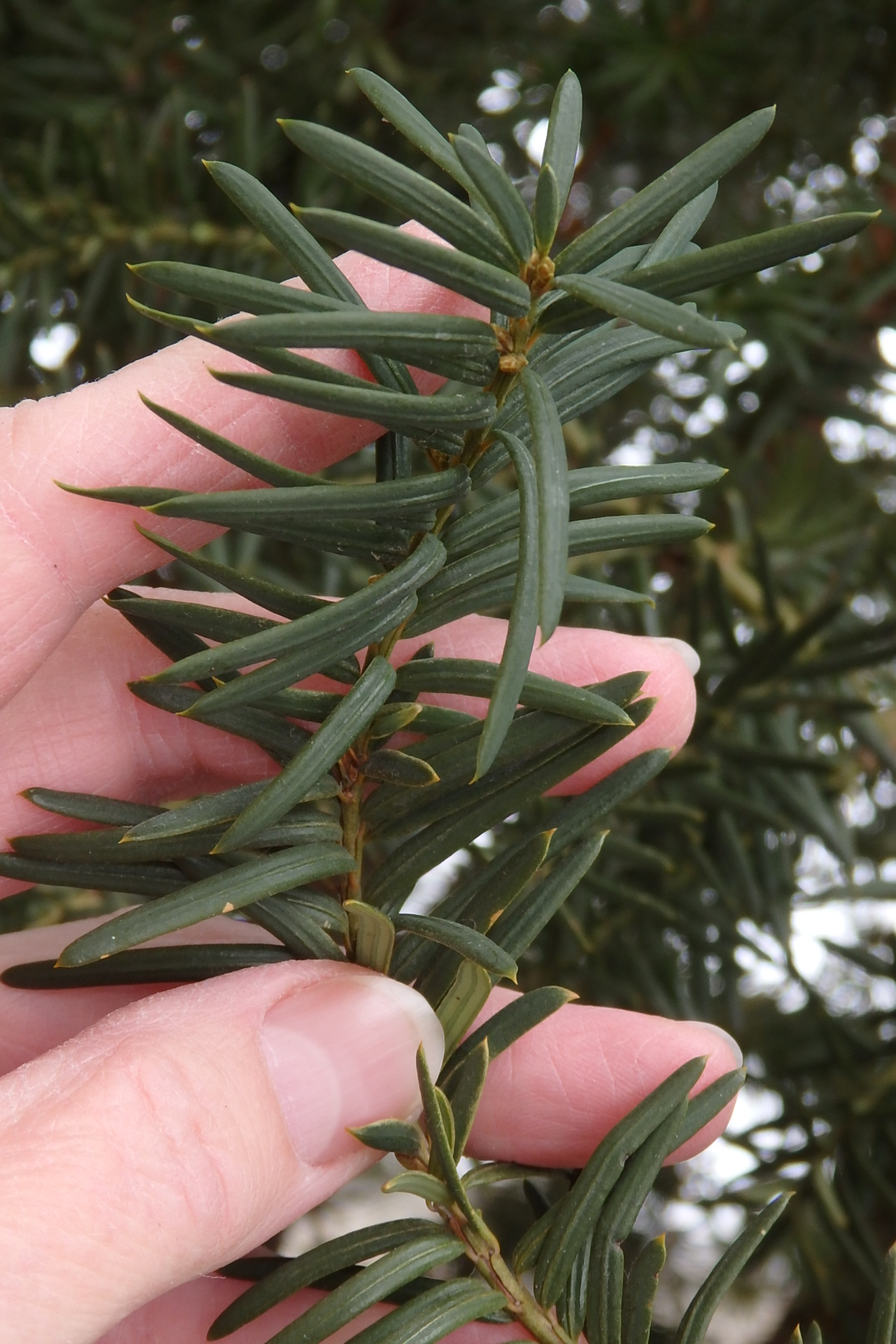