Species:
Grizzly Bear (Ursus arctos)
Species Identification Confidence:
I'm absolutely certain
Observation Method(s):
Individual(s) Observed (seen)
Photographed
Count:
1
Count Type:
Absolute
Sex:
Unknown
Life State:
Alive
Life Stage:
Mature (Adult)
Species Account:
Location: 45degrees 15'48.58" N and 115degrees 45'57.37"W
I was about 20 yards off the road (going around downed trees). I was on a very small motorbike CRF 100. I had stopped to see where my next path would be as I was working my way around downfall. I was looking along the road for a path then I turned my head straight again and right in front of me at about 20-25 yards was a full grown, very healthy, grizzly bear. It had blonde hair along the top and the hump (I could see the individual hairs shining in the sunshine as they moved when he walked over the uneven ground). It had tan hair on sides and on face. It had brown hair on feet. It had a huge head. It had huge feet. It had huge front shoulder muscles. If I was the center of a clock, with bike facing in direction of the 12, when I suddenly saw him there he was at 11 oclock and walking perpendicular to my path. He walked straight across (perpendicular to me) to 1:00 oclock glancing my way along the stroll, then he stopped and turned his shoulders and giant head right at me. From the second I saw him, I stayed completely still. My bike was running, both my feet on the ground and clutch was in. I had a full helmet on with a face shield. I moved my eyes to watch him as he moved. He sniffed the air and looked at me for a bit and then looked at the ground and moved from 1 to about 3:30 and stopped and again stared at me and sniffed me out. He looked like he was trying to figure out what I was. I rotated my head slightly to get my helmet completely right as I moved my eyes to watch him. He then circled on to about 5:30 and stopped again briefly checking me out. Then he circled around more behind my back (I had to move my head from the right all the way around towards the left side so that I could continue to keep an eye on him). He continued to circle around to the 7:00 oclock position. Then he slowly turned and carefully walked away (in the direction of 6 oclock). He decided to let me live. When he was about 100 yards away, I thought I could get my gun out of my backpack fast enough even if he charged from that distance, so I stopped the engine (the bear, while walking the other way, turned his head and looked back at me at that point but only for a second), I got off my bike and got my gun out in case he decided to come back. After a small time of fumbling with my bike (it tipped over on the hillside), I realized no one would believe that I had a grizzly bear circle me, so I got out my phone and took several pictures in the direction of the grizzly. You will need to zoom in down the road a little ways and you'll see the bear.
Photo(s): 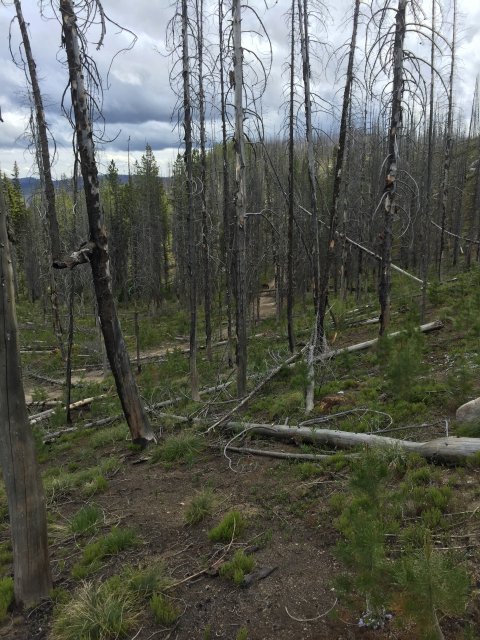 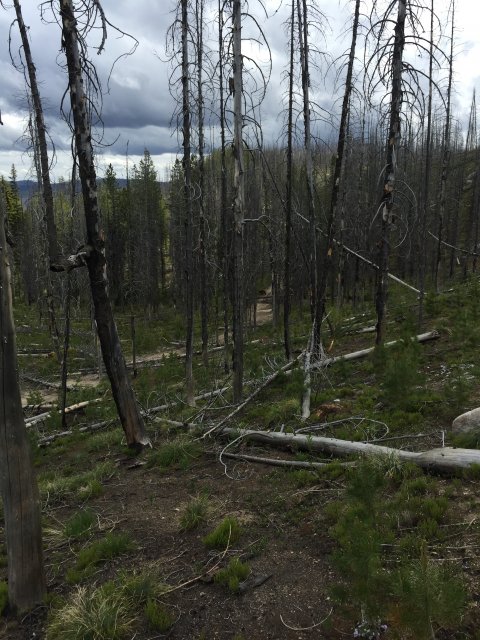 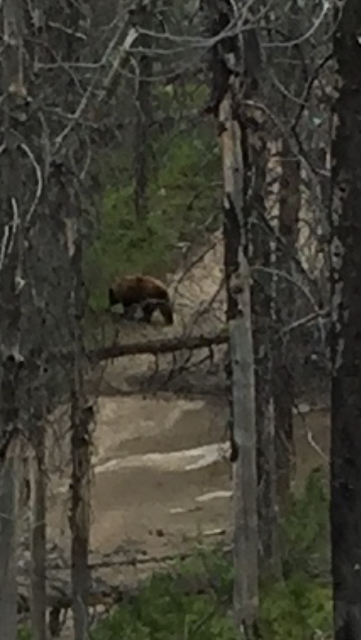 Location:
Decimal Degrees: 45.2,-115.7
Location Precision:
±250 meters
Location Resource:
Google Maps Pin Drag & Dropped
Location Use:
Unknown
Habitat Description:
Mostly many years ago (9 years ago) burned lodgepole with some standing and much fallen over previously and just this winter/spring. Quite a bit of rocks in this area. Also some small ravines with lodgepole and many bushes. photos show the habitat quite well.
Region:
Southwest Region
Game Management Unit:
19A
County:
Idaho