As I think I’ve told both of you… last week on 07/24/2013, my crew (including some FSPW members) and I surveyed the fens and peatlands surrounding Blacktail Lake. Among some of the more exciting finds were both spotted frogs and boreal toads, as well as a very fast-moving snake that did not appear to be a garder snake. I wasn’t sure if it was a rubber boa, but have attached several photos of the snake and the amphibians. We have lots of UTM coordinates for our different finds, but the amphibians were literally everywhere within 12-20 feet of the water’s edge. We found what appeared to be tadpoles of both species in shallow water around the lake perimeter in several locations, as well as varying stages/sizes of toads in the sedge community around the lake. We also saw egg masses around the lake perimeter.

As you can see from the photos, the bigger toads seemed to move less and were easier targets for photos. The smaller toads moved fast and hid more easily. We saw many more adult spotted frogs than large boreal toads; we probably saw 40-50 full size spotted frogs just around the northern and northeastern shore of the lake, while only seeing 12-20 large boreal toads in the same general area. However, we did see several small (~1.5” long) toads in the same area. If my understanding of tadpoles is correct, we found far more boreal toad tadpoles than frog tadpoles. Boreal toad tadpoles are almost black, right? The other tadpoles we saw were much lighter in color, with some mottling/spots. In places, there were literally hundreds and hundreds of very dark/black tadpoles of various sizes; much fewer of the lighter/spotted tadpoles.

Let me know if you need more details, and we would like to know what you believe the snake is… Thanks. Have a great day! 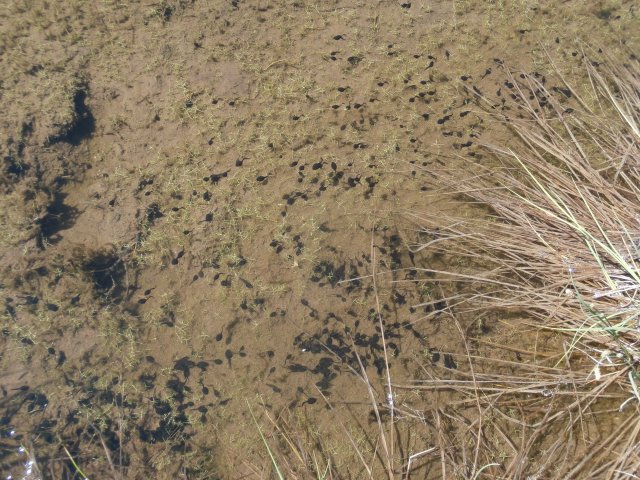