Species:
Wolverine (Gulo gulo)
Species Identification Confidence:
I'm absolutely certain
Observation Method(s):
Observed Individual(s) in Hand or Close Range
Photographed
Count:
1
Count Type:
Absolute
Sex:
Female
Life State:
Alive
Life Stage:
Unknown
Species Account:
My son and I saw the wolverine while eating lunch at Bellas Lake No. 3 during a day hike from our camp at No. 2. Distance was approx. 150 feet initially across the north tip of the lake. It heard and saw us, too, and began moving away. We crossed a boggy meadow and followed it up a rocky draw where the attached cropped photo was taken at roughly 250 feet. Per the photo, most of the tail and rump were creamy colored against dark brown (back, head, and tail tip). The creamy region split into two thin bands along the flanks (brown patch in between) and converged again near the neck. We estimated the weight at 20 pounds, similar to a Maine Coon cat, and suspect it is female due to the weight plus its slender body (in contrast to a appreciably larger, stockier, probably male wolverine I saw 3 years ago).
Photo(s): 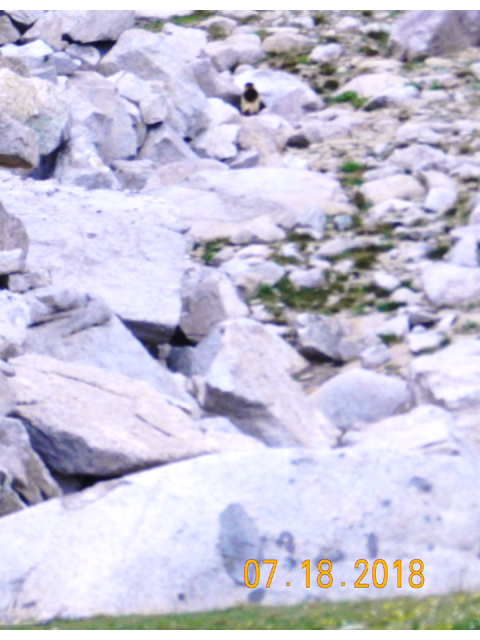 Date Time:
July 18, 2018, 12:00 pm MDT
Date/Time Precision:
Hour
Date Notes:
The sighting occurred approximately at noon and lasted for about ten minutes as we watched it scamper over and around rocks as it moved up the draw, eventually leaving us far behind.

Identification Tools:
Identification relied primarily on size (far too large for a pine martin) and distinctive pattern at relatively close observation distance. Unlike a badger, the body was not low to the ground and the head was not flat.
Survey Method:
Incidental Observation
Location Unresolveable:
No
Source Type:
Animal Observation Report (Sightings)
Verification Status:
Verified