Species:
Wolverine (Gulo gulo)
Species Identification Confidence:
I'm absolutely certain
Observation Method(s):
Individual(s) Observed (seen)
Tracks Observed
Count:
1
Count Type:
Absolute
Sex:
Unknown
Life State:
Alive
Life Stage:
Unknown
Species Account:
I had stopped to rest near the upper lake/tarn in Surprise Valley (Pioneers) and heard some rockfall coming from the slope above me (the dividing ridge between Surprise Valley and Fall Creek, directly north of Standhope Peak). I grabbed binoculars from my pack and watched as the wolverine descended the talus-strewn slope. It stopped once to urinate (squatting as it did, though I don't know if both males and females do...), and came to the edge of the lake (directly across from me, slightly less than 250 yards away). It then paralleled the lake (traveling east), lingering briefly to investigate various places as it went (At seeps/springs issuing from the rubble, openings in boulder piles, etc.). I lost sight of it as it went behind a granite outcrop and (presumably) into the stand of whitebark pines near the lake's inlet. I waited about 30 minutes after it passed, but never saw it again. I then walked around the lake and managed to find one set of its tracks in a small muddy depression surrounded by sedges and grasses (picture of tracks included). The individual was quite dark, with off-white patches on its chest and forehead. I was struck by how long the tail was, the longer hairs at the end appearing somewhat flared out. I observed the individual for approximately 25 minutes.
Photo(s): 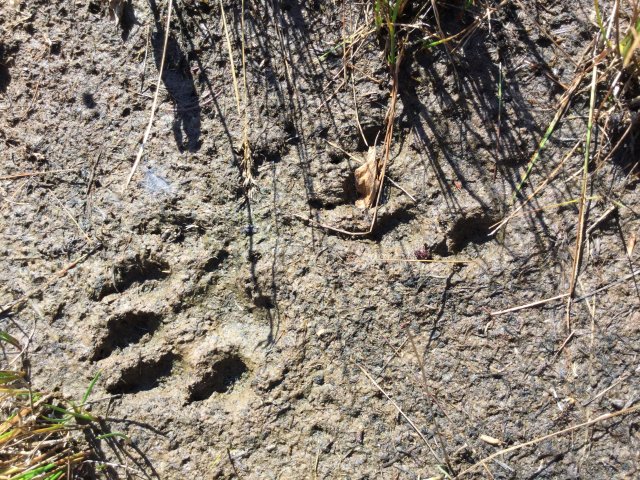 Date Time:
September 2, 2017 (All day)
Date/Time Precision:
Minute
Date Notes:
Observed the individual from about 9AM to 9:25AM