Species:
Wolverine (Gulo gulo)
Species Identification Confidence:
I'm absolutely certain
Observation Method(s):
Individual(s) Observed (seen)
Observed Individual(s) in Hand or Close Range
Photographed
Count:
3
Count Type:
Absolute
Sex:
Unknown
Life State:
Alive
Life Stage:
Unknown
Species Account:
We hiked into Betty Lake on 7/14/2017 just below Standhope Peak. When we came up on the Lake I saw what I first thought was 3 otters on the other side of the lake rolling around on the snow slide that was still present on south side of Lake. I pulled out my Binoculars and was amazed to see that they were Wolverines! All three hung out on the snow then made there way up snow to a green spot on the mountain. There they just hung out, wrestled, pulled vegetation out of the ground. We watched them 20 minutes until some runners came by on there way to Goat Lake. We let the runner look at them and one of them was from Alaska and had seen wolverines before and was shocked to see them in Idaho. They decided to try and skirt around but the animals smelled them and ran back down the way they came and around the lake to the northwest. We watched them until they went into the rockslide below standhope. Took some zoomed in pictures but hard to see. Reported them to IDFG employees on Saturday morning that were pulling horse trailer into Broad Canyon campground.
Photo(s): 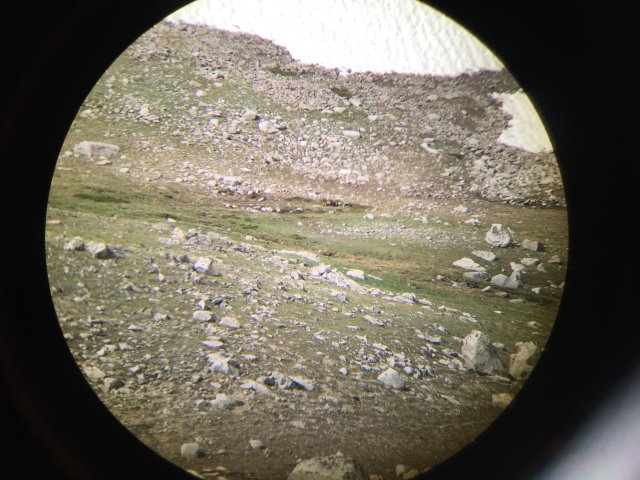