Idaho, like other Western states is experiencing overall declines in mule deer populations, although in some areas, mule deer numbers are stable or increasing. Because mule deer are important in Idaho, the Idaho Department of Fish and Game (IDFG) has committed additional personnel and resources to improving habitat and increasing mule deer numbers. The Idaho Mule Deer Initiative was created in 2004 and is a statewide effort, but particular effort will be made across eastern, southeastern, and south-central Idaho. 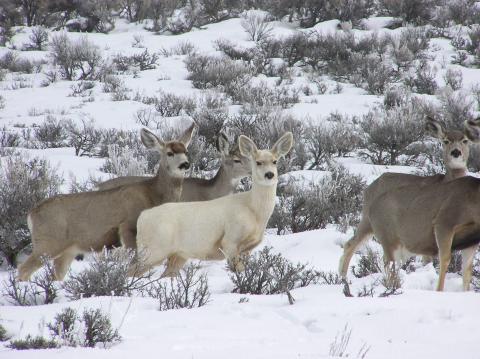 The MDI has three basic goals:

While these three goals are listed separately, they are not mutually exclusive of each other. Hunter satisfaction can be increased in one of two ways; 1) increase deer populations, or 2) manage the deer hunting season framework to better accommodate the various types of deer hunters identified in the statewide mule deer management plan (2008). Ultimately, mule deer populations can only increase through increased fawn production which is closely associated with habitat abundance, quality, and connectivity. Because of this MDI is a primarily habitat based initiative. Habitat is a key component influencing mule deer populations. Habitat changes have lessened the ability of some areas to support desirable mule deer populations. 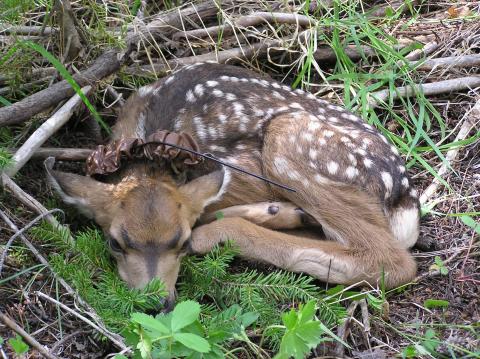 MDI is More Than Mule Deer

Due to the large size of a mule deer’s home range and the fact that a majority of Idaho’s mule deer are migratory, mule deer habitat management requires the improvement of numerous habitat types and the maintenance of landscape permeability, or the ability deer have to travel across the landscape. As a result, managing for mule deer benefits numerous wildlife species across the state of Idaho.

WVC’s are increasing every year in Idaho. The primary reason for this is because the miles of roads and traffic volumes on these roads are increasing annually. Idaho has been keeping WVC data since 1902, and since that time has collected over 22,000 WVC’s across the state. Of these 22,000 entries, over half (53%) of the reported animals have been mule deer. In 2011 the reported number of deer killed equaled 10% of that year’s deer harvest. The WVC’s involving deer in 2011 had an estimated cost of nearly 8 million dollars. WVC reporting is getting better each year, with 43% of the reported 22,000 WVC’s being from 2011 and 2012. What makes this data even more alarming is that studies in Utah are finding that we are only detecting half of the actual WVC’s out there for big game. WVC’s are a huge problem in Idaho, and not just for mule deer, there have been 80 different species reported since 1902. IDFG and ITD are currently working together to increase WVC data collection efforts and identify WVC hotspots. Once these hotspots are identified IDFG and ITD will work cooperatively to mitigate these locations.

Private lands, specifically those enrolled in the Conservation Reserve Program (CRP), support many mule deer populations throughout different times of the year. We are actively seeking opportunities to enhance private lands and benefit mule deer and other wildlife.

MDI cooperatively funds three positions that provide technical assistance and funding opportunities to landowners who are enrolled in federal programs such as CRP and State Acres for Wildlife Enhancement (SAFE), or are interested in managing their properties for mule deer and other wildlife species. SAFE is an USDA program focused on improving habitat for Columbian sharp-tailed grouse. This program improves private lands for both sharp-tailed grouse and mule deer. The MDI biologist positions use various partnerships and federal program funding to accomplish habitat projects that would otherwise not be possible. MDI farm bill biologist positions have enabled the program to increase the number of acres improved from a few hundred per year to thousands annually. This is critical, because in order to increase mule deer herds within Idaho it is necessary to improve habitat at a large/landscape scale. This new direction for the MDI program is helping IDFG to achieve this goal. These positions are cooperatively funded through; IDFG, Pheasants Forever (PF), US Fish and Wildlife Service, and the Intermountain West Joint Venture. 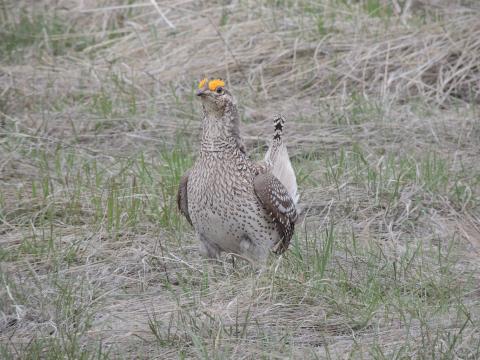 Sage steppe communities are composed primarily of sagebrush, but contain other important vegetation components that mule deer utilize such as bitterbrush and an abundant forb community. Sage steppe is an important habitat type throughout the year for mule deer, particularly in the winter months. Sagebrush and bitterbrush are important components of mule deer winter range that provide forage, security and thermal cover. Sagebrush and bitterbrush are critical food on winter range because they are nutritious, available (above the snow), and can slow the depletion of fat reserves over winter. The MDI program has worked to improve sage brush through shrub plantings (over 1 million shrubs since 2004), sagebrush aerial seeding efforts, and working with federal and state land management agencies to improve sage steppe. MDI is also cooperating with the Sage Grouse Initiative (SGI), an NRCS program established to improve sage steppe habitats for both sage grouse, but also benefits mule deer. 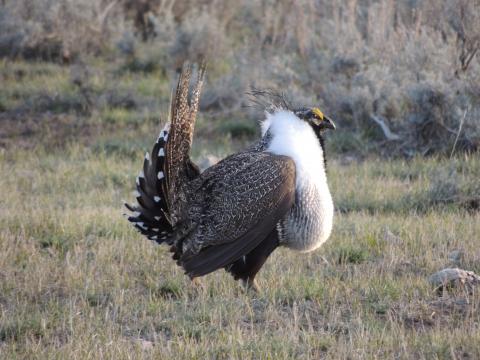 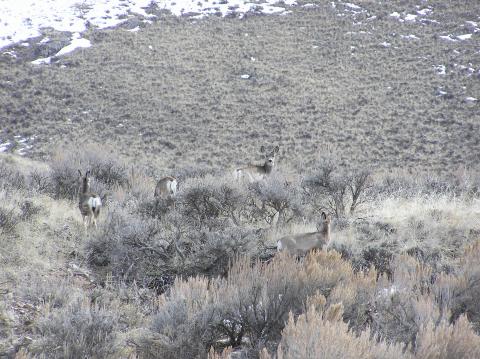 Riparian areas are some of the most rare and diverse habitats in Southern Idaho. Mule deer utilize riparian habitats for forage, water, shelter, and fawning areas. These habitats are important every year to mule deer, but are particularly important in drought years. MDI is currently working with land management agencies (USFS, BLM, NRCS) to improve riparian areas through better grazing management practices such as fencing and offsite water developments. 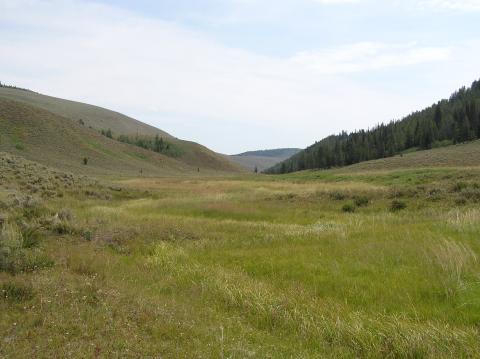 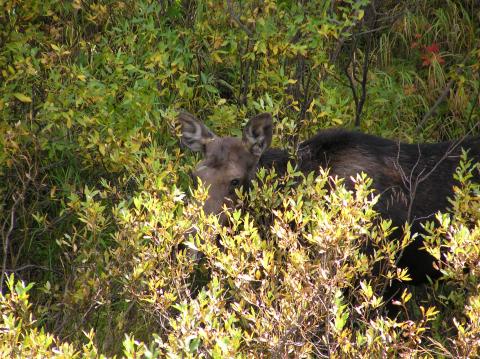 Aspen is considered a keystone species and an indicator of ecological integrity and biodiversity. Aspen communities play a large role in mule deer ecology from gestation through adulthood. While winter forage has often been considered the limiting factor of mule deer, it may actually be summer range nutrition that plays a more critical role in mule deer populations. Recent studies have investigated the effects of nutrition on mule deer production and concluded that summer forage has the greatest impact on mule deer populations. Nutrition affects juvenile survival, age of first reproduction, pregnancy, fawn birth weight and adult survival. Lactation is the most nutritionally demanding part of the annual nutritional cycle for does, leading researchers to conclude summer nutrition may be more important to population growth than winter nutrition. Aspen communities have long been described as critical summer habitat for mule deer, because they often contain a rich diversity of forbs, grasses, and shrubs that provide cover and forage. Many years of efficient fire suppression have led to a decline in aspen forests and an increase in coniferous forests. Because aspen communities are second in plant diversity only to riparian areas, MDI is actively involved in working with land management agencies to increase aspen communities to benefit mule deer and other wildlife. 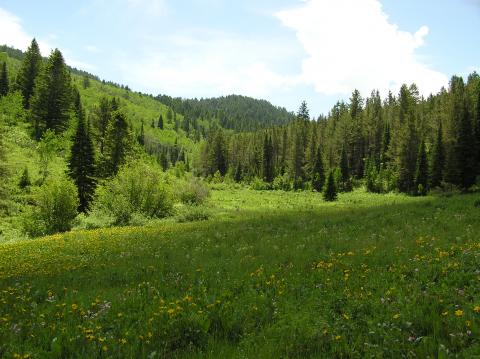