Hunters satisfied with controlled hunts, but would consider options

Hunters satisfied with controlled hunts, but would consider options

Idaho Fish and Game recently conducted a survey to “take the pulse” of hunters about controlled-hunt drawings, and the majority of them are satisfied with the current system. The approval percentage is also higher than it was a decade ago.

Based on a random, mail-based survey, which is the “gold standard” of scientific surveys, 58 percent of hunters agreed with the statement “I am satisfied with the current controlled-hunt drawing system.” Another 33 percent said they were dissatisfied, and 9 percent were neutral.

There are no pending proposals to change the controlled-hunt system, but Fish and Game commissioners want to know if opinions have changed since 2005 when a similar survey was done.

The recent survey was done in October and November and got 12,600 responses through three methods: random mail, random email and an open survey on the department’s website. The basic messages from hunters were consistent, but the degrees by which people agreed or disagreed varied by different polling methods with people more likely to strongly agree or disagree in the open survey.

Hunters were asked in the mail survey if the current controlled-hunt system were altered, which options would they consider.

Some options had approval numbers similar to that of hunters’ satisfaction with the current system, which made Fish and Game officials curious why the majority of hunters were satisfied, but they also seemed to favor changes. Deeper analysis showed hunters satisfied and dissatisfied with the controlled-hunt system were willing to consider changes to it.

Both the majority of hunters who are satisfied with the current system, and the minority who are dissatisfied, favor extending the waiting period from one year to two or three years for hunters who drew a tag as a method to change drawing odds.

Both groups mutually disagreed with an option to change drawing odds by charging more to apply for trophy buck/bull hunts.

The satisfied group disagreed with limiting people to apply for one species per year for trophy bull/buck hunts. Hunters who are dissatisfied with the current system split at 46 percent favoring and opposing that method of changing drawing odds.

“The message we get is that the majority of hunters are satisfied with the current system,” said Fish and Game’s Deputy Director Ed Schriever. “When asked about options to change the system, hunters satisfied and dissatisfied with the system showed mutual support for longer lay outs for hunters who drew a bull or buck tag for a controlled-hunt.”

The survey was intended to gauge how hunters feel about certain topics, but it was not intended to be a yes or no vote about any particular one. That’s why if Fish and Game proposes any changes to the controlled-hunt system, there would be more opportunities for hunters to comment.

Fish and Game also asked hunters their opinions about auctioning big game tags and adding more. The department currently auctions one tag for a bighorn sheep. Commissioners have legislative authority to raise money for wildlife management by auctioning up to 12 more big game tags, which they have never done.

Asked if it was acceptable for Fish and Game to auction tags to generate funds for wildlife management programs, 55 percent of hunters in the mail survey agreed, 37 percent disagreed and 8 percent were neutral.

Neither the department nor the commission has proposed increasing auction tags, so the survey provides an understanding of how hunters feel about them, and also a baseline for comparison for future surveys.

More information about the surveys is available online at https://idfg.idaho.gov/about/2015-ch-summary.

Why did Fish and Game do this survey if there are no formal proposals to change the system?

Fish and Game is also frequently asked why it doesn’t have a point system to increase odds for unsuccessful controlled-hunt applicants similar to those in many other Western states.

Why was the survey done three ways?

It was valuable for Fish and Game officials to see the similarities and difference in the results using three methods. The random mail survey is considered the most accurate gauge of hunters’ opinions because they were randomly selected from the entire pool of licensed hunters.

The department does not have email addresses for all hunters, so that’s a smaller pool and not necessarily representative of the entire cross section of hunters. But an email survey is cheaper and less labor intensive than a mail survey because there’s no printing or postage involved, and the results are automatically entered and tabulated by the computer rather than manually by Fish and Game staff.

An open internet survey is inherently biased because people can campaign for or against certain topics and encourage others who agree with them to take the survey. However, it’s also good gauge of how strongly segments of hunters feel about something.

What will commissioners do with the information?

Commissioners will use the survey results to help them decide whether there’s enough interest to change the current system, and if so, which options to consider. Any formal proposal would undergo public review, and hunters would have several chances to comment. 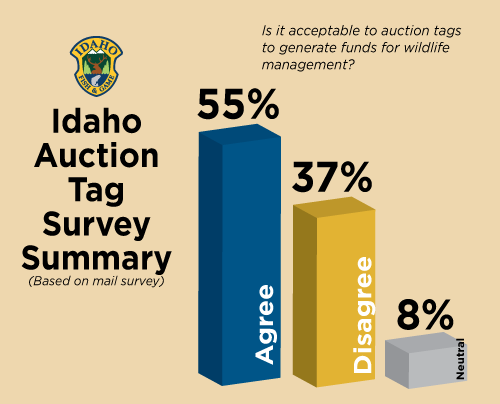 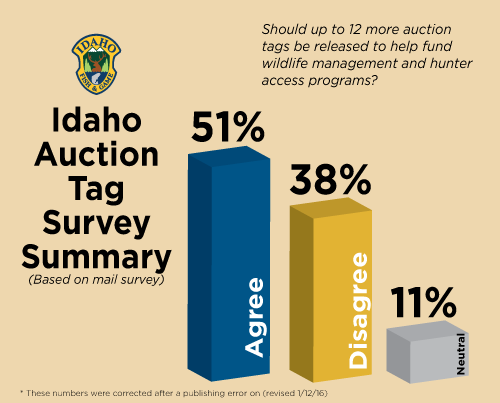