Idaho Fish and Game has detected Chronic Wasting Disease (CWD) in Idaho, which is a contagious and always-fatal neurological disease that affects deer, elk, moose and reindeer. However Montana, Utah and Wyoming also have confirmed cases of CWD in animals close to the Idaho border.

Idaho Fish and Game has tested animals for CWD for more than two decades, and that testing is ongoing. Fish and Game is working with hunters, taxidermists, meat processors, and others to test harvested deer and symptomatic deer, elk and moose throughout Idaho.

Q: Why is Fish and Game concerned about CWD?

A: There is no cure for this fatal disease, and possible population impacts to Idaho’s elk, deer and moose herds are a major concern.

Several states with CWD in their wild deer and elk herds have documented population declines and shifts in age structures. That has resulted in fewer mature bucks and bulls in areas with high numbers of animals infected with CWD, or where CWD has been in the wildlife population a long time.

The lack of treatment options, vaccination, reliable diagnostic tests for live animals, and persistence of the disease in the environment are all cause for concern, because ultimately, CWD poses a risk to hunting opportunities.

Q: How can hunters have animals they harvested tested?

A: Hunters can have their animal tested through Fish and Game’s annual hunter sampling or by submitting their own samples to a private testing lab. Please contact a regional Fish and Game office for information about their annual CWD surveillance sampling plan, staff availability to collect samples and private testing options.

To sample for CWD, Fish and Game staff collect lymph node and or brain stem tissue from fresh or frozen harvested heads. Meat or muscle tissue cannot be used to test for CWD. Turnaround time for Fish and Game’s annual CWD samples is about 4-6 weeks, and hunters will not be contacted if their samples are negative

Q: What else is Fish and Game doing to prevent CWD?

A: The Fish and Game Commission and Idaho Legislature have passed rules to assist in CWD prevention, including:

Q: What are the symptoms of CWD?

A: Symptoms include excessive salivation, drooping head/ears, tremors, extremely low body weight, and unusual behavior, such as showing no fear of humans and lack of coordination. But CWD cannot be diagnosed strictly by symptoms because other diseases, or conditions, can also cause similar symptoms in an animal. Also, animals can be infected for months or years before showing symptoms

Q: What if someone sees an animal that appears to have CWD?

A: Early detection of CWD is vital to containing the disease and preventing it from spreading, and Fish and Game welcomes reports by hunters and citizens.

A person should accurately document the location of the animal (GPS coordinates if possible) and report the species and gender, if known. Take pictures, if possible, and immediately contact the nearest Fish and Game regional office.

Do not attempt to touch, disturb, kill or remove the animal. Remember, early detection in an area is vital to containing the disease and preventing it from spreading to other areas of the state 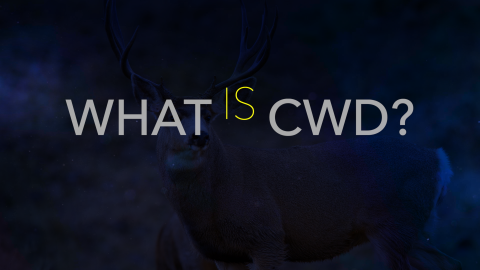 See map of states and provinces with CWD cases.

Other states have dealt with CWD in wildlife populations for decades. It was first recognized in Colorado in 1967, and at that time, it was unique to North America. As of 2021, CWD has been detected in captive and free-ranging deer, elk, moose and reindeer in over half of the US states, four Canadian provinces, Norway, Finland and South Korea. According to the U.S. Center for Disease Control, there has been no reported cases of CWD infecting people. However, CDC recommends that people do not eat meat from an animal that tests positive for CWD.