Hunters satisfied with controlled hunts, but will consider options

Idaho Fish and Game recently conducted a survey to “take the pulse” of hunters about controlled-hunt drawings, and the majority of them are satisfied with the current system. The approval percentage is also higher than it was a decade ago.

Based on a random, mail-based survey, which is the “gold standard” of scientific surveys, 58 percent of hunters agreed with the statement “I am satisfied with the current controlled-hunt drawing system.” Another 33 percent said they were dissatisfied, and 9 percent were neutral. 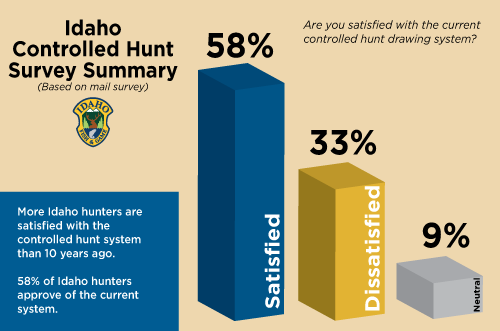 Select a question to expand the answer

Q1: Why did Fish and Game do this survey if there are no formal proposals to change the system?

Fish and Game is also frequently asked why it doesn’t have a point system to increase odds for unsuccessful controlled-hunt applicants similar to those in many other Western states.

Q2: Why was the survey done three ways?

Answer 2: It was valuable for Fish and Game officials to see the similarities and difference in the results using three methods. The random mail survey is considered the most accurate gauge of hunters’ opinions because they were randomly selected from the entire pool of licensed hunters.

The department does not have email addresses for all hunters, so that’s a smaller pool and not necessarily representative of the entire cross section of hunters. But an email survey is cheaper and less labor intensive than a mail survey because there’s no printing or postage involved, and the results are automatically entered and tabulated by the computer rather than manually by Fish and Game staff.

An open internet survey is inherently biased because people can campaign for or against certain topics and encourage others who agree with them to take the survey. However, it’s also good gauge of how strongly segments of hunters feel about something.

Q3: What will commissioners do with the information?

Answer 3: Commissioners will use the survey results to help them decide whether there’s enough interest to change the current system, and if so, which options to consider. Any formal proposal would undergo public review, and hunters would have several chances to comment.